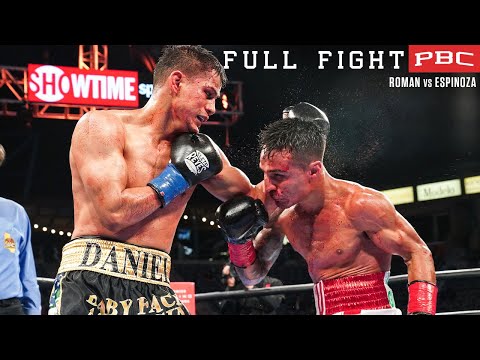 “This win is a step closer to getting back on top and getting a world title once again,” said Roman. “I knew he was a tough fighter who hit hard, so I had to fight smart and make adjustments.”

After a close first half of the fight, the Los Angeles native Roman began to figure out the awkward and hard-charging attack of Mexico’s Espinoza. In round seven, Roman connected on a vicious combination of double left uppercuts, punctuated by a sweeping left hook, that bloodied the nose of Espinoza.

“I felt good overall in there,” said Espinoza. “I could have pressured him a bit more and closed his angles, but it was a good fight. Danny is a tough fighter who withstood a lot of shots to the head. He’s a quality fighter.”

Espinoza had actually out landed Roman 124 to 119 across the first six rounds of the fight before Roman’s adjustments led to a 101 to 66 edge in punches landed in his favor across the final four frames.

“I started to get my distance and started fighting my fight and controlling the ring,” said Roman. “Once I did that, everything started to fall into place. I was surprised he went the distance, but he has a lot of heart. He’s a tough fighter.”

The bloodied nose immediately became a target for Roman, as Espinoza had to be checked by the doctor before beginning the ninth round before continuing to take the brunt of the punishment in the fight. Roman’s performance in the second half of the duel was enough to give him the victory, as he prevailed on all three judges’ scorecards with tallies of 97-92 and 98-92 twice. All three judges gave Roman the final six rounds of the fight.

“I’m the mandatory so I want a title shot now,” added Roman after his victory. “I want the winner of the main event.”