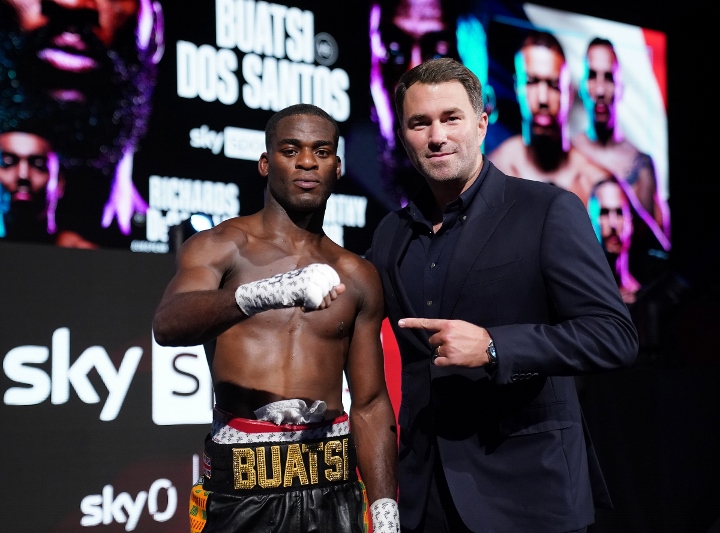 Canelo Alvarez could decide whether Joshua Buatsi gets the title shot he wants next.

Promoter Eddie Hearn revealed after Buatsi’s win against Craig Richards on Saturday night that he would like to bring a Dmitry Bivol-Buatsi fight to O2 Arena in London later this year. Bivol’s schedule is dependent on Alvarez, however, because the Mexican icon can exercise an immediate rematch clause in his contract that would entitle him to a second shot at Bivol’s WBA light heavyweight title in his next fight.

On Monday, during a press conference in Mexico, Alvarez revealed that was going to stick to his original plan – by having a third showdown with rival Gennadiy Golovkin next – and that scenario could allow for a Bivol-Buatsi bout later this year. London’s Buatsi beat Richards by unanimous decision in a 12-round WBA elimination match Saturday night at O2 Arena and is the WBA’s third-ranked contender for Bivol’s title.

“I think, you know, Canelo’s got the option to fight Bivol next or fight Triple-G, then Bivol,” Hearn said.. “If he fights Triple-G, Bivol’s looking for a big fight. I’d love to bring Bivol against Joshua Buatsi to the O2. That’s an incredible fight.

“Wherever [Buatsi has] gotta do that, he’s ready to challenge. You know, it’s been six years nearly since Rio, since he turned professional. And, you know, he’s had a great development. That was an incredible fight tonight, but I don’t think there’s any more steps. I think if Dmitry Bivol is available and ready to go towards the end of the year, I think that’s the fight for Joshua Buatsi.”

“We’ve said it, man,” Buatsi said. “We want the world title next. I want to fight here for it. But listen, again, maximum respect to [Richards], man. I can’t give him enough credit. But we’ve made it clear. We’ve made it very clear. You know what it is. Eddie know what it is. Everyone knows what it is, man. My team and I, they’re there. We’re ready, man.”