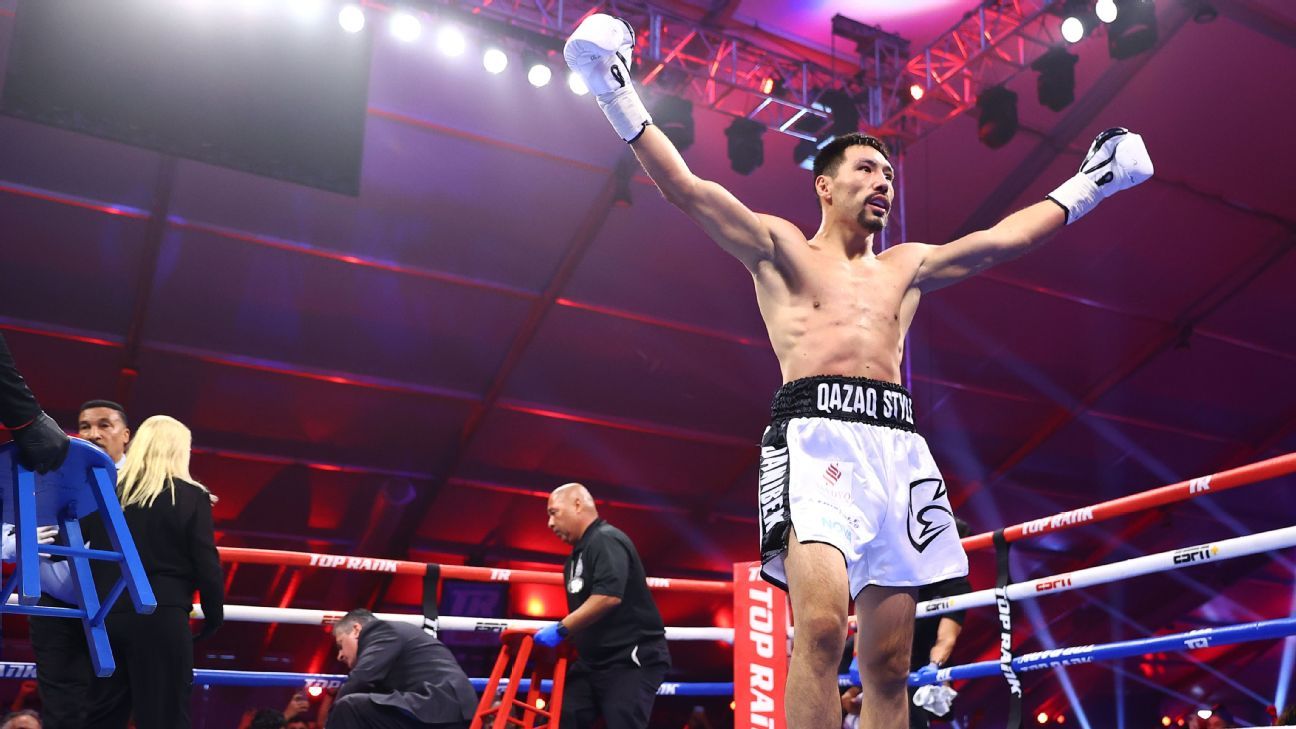 Janibek Alimkhanuly announced his arrival as a force in the middleweight division on Saturday night in Las Vegas, and he did it with thunderous force, capturing the vacant WBO interim world title with a second-round knockout of a thoroughly outclassed Danny Dignum.

Alimkhanuly (12-0, 8 KOs), who is 29 and from Kazakhstan, led the dance from the start, dropping his British opponent midway through the first round with a five-punch combination punctuated by a straight left hand. Dingnum (14-1-1, 8 KOs) got back up but was preyed upon for the rest of the round and into the second.

The end came when Alimkhanuly trapped Dingnum against the ropes and landed a left uppercut that collapsed him to the canvas. Referee Tony Weeks waved off the bout at 2:11 as Dingnum lay on his back.

Although both fighters entered the bout undefeated, Alimkhanuly, No. 7 in the ESPN middleweight rankings, was clearly competing at a higher level. A 2016 Olympian and a gold medalist at the 2013 amateur World Championships, he has stopped his last six opponents, most recently a pair of former world champions, Rob Brant last June and Hassan N’Dam in November.

Though Saturday’s Top Rank bout at Resorts World Event Center lasted barely 5 minutes, Alimkhanuly unleashed a lot of offense, especially in Round 2, when he threw 48 punches and connected with 21. And yet afterward he said through an interpreter, “I haven’t shown my best punches yet. Maybe in my next fights.”

“I am in the ring right now, and I want to tell every champion in this weight class, I am here waiting for you,” Alimkhanul said. “I am asking every champion to come and fight me.”

This interim title bout was made necessary because WBO champ Demetrius Andrade was scheduled for a super middleweight fight on this night, and while that bout was canceled because of injury, Andrade is expected to continue his pursuit of a 168-pound belt.

When Alimkhanuly was asked who he wants next, he said, “Maybe Charlo,” referring to WBC champ Jermall Charlo.

The WBA and IBF middleweight belts are in the possession of 40-year-old Gennadiy Golovkin, who is also from Kazakhstan. Alimkhanuly declined to call out his elder countryman.

“In our tradition,” he said, “when you are younger you cannot call [out] the guy that is up. I hope that he is going to go to other division, 168, because I want to gather all of the belts in the 160 division.”

“After tonight, I don’t think I’m where I need to be, especially fighting at an elite level anymore,” Herring said.