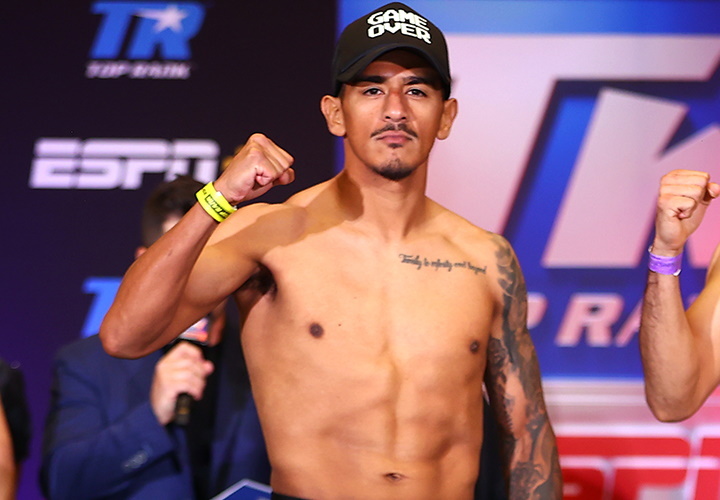 Jessie Magdaleno got in some much needed rounds in a one-sided performance.

The former featherweight titlist from Las Vegas dominated Edy Valencia of Mexico in their all-southpaw, eight-round featherweight bout on the undercard of the Janibek Alimkhanuly vs. Danny Dignum middleweight main event at Resorts World in Las Vegas.

Magdaleno boxed beautifully as he fired off jabs, hard combinations, and continually spun away to his right, preventing the cloddish Valencia from being able to mount a decent attack.

Not surprisingly, all three judges scored the bout 80-72, giving Magdaleno every round.

It was a largely flawless performance, considering that Magdaleno had not fought in over two years, or 709 days.

In the opening round, Magdaleno and Valencia both started off fast, winging hard shots, few of which connected. Magdaleno connected with a glancing right hook midway through the round.

Magdaleno fought smartly in the second round, alternating between bursts of combinations and using his movement. Valencia stalked forward but landed few punches.

In the third round, Magdaleno continued to find success with his boxing. This time he began mixing in hard left hands to the body. An unbowed Valencia swung with wide right hooks that hit nothing but air. Magdaleno picked up the pace in the waning seconds of the round, landing consecutive right hooks.

With a minute remaining in the fourth round, an inadvertent head clash occurred. Magdaleno answered back with an overhand left. Valencia was not able to capitalize on his offense when he had Magdaleno on the ropes. Magdaleno landed whipping right hooks to end the round.

Magdaleno found his groove in the fifth round, landing multiple three-punch combinations as he continued to evade Valencia’s pressure attack.

Magdaleno continued his dominance in the sixth round. In one exchange he slipped multiple punches before answering with a hard right hook, then circling away to his right.

In the seventh round, Magdaleno seemed to take his foot off the pedal and elected to move and use his jab. Valencia, however, was unable to take advantage of the lull.

Magdaleno stood his ground more in the first half of the eighth and final round. Once more, Magdaleno got the better of Valencia during the exchanges on the ropes.