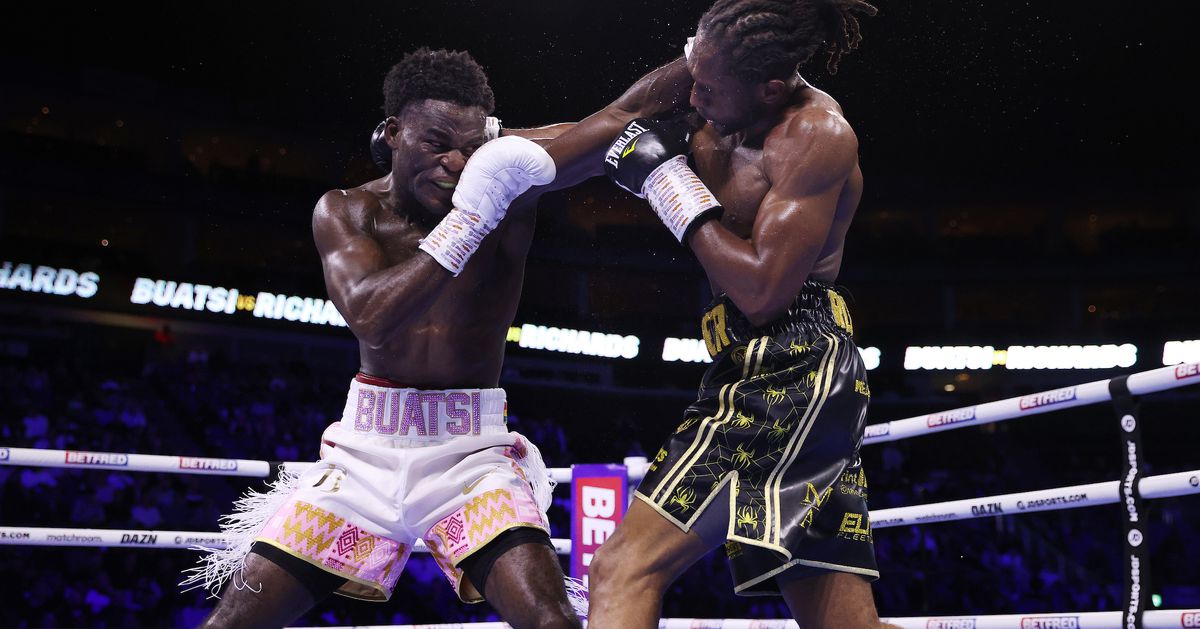 Joshua Buatsi survived a stern test from Craig Richards, earning a close but unanimous decision after twelve very competitive and entertaining rounds. The main event didn’t have the rock’em sock’em chaos of Alen Babic and Adam Balski (much more on that one later), but it was an active, well balanced and lively showcase that likely raised the profiles of both Buatsi and Richards in a light heavyweight division that has a lot of potential opportunities.

Richards (17-3-1, 10 KO) takes the loss, but gave an excellent performance that tested Buatsi (16-0, 13 KO) throughout the fight. Both men landed eye catching punches and had moments of success in almost every round, taking turns trading snapping jabs, hard body punches, and occasional on-the-belt punches that led to warnings in both directions.

Throughout the fight, Buatsi seemed to do just a little bit more from round to round, but Richards had brilliant counters and combos throughout. Neither man ever really took control at any point, and every successful exchange was answered promptly.

It was a crisp, tense match from beginning to end, with the biggest fireworks coming in the 8th round when both men stunned each other with punishing hooks.

After the fight, both men exchanged compliments and respect, and Buatsi and Eddie Hearn floated the possibility of a fight against Dimitry Bivol if Canelo Alvarez elects to face Gennadiy Golovkin rather than calling in the immediate rematch.

Chantelle Cameron looked a clear level or two above a very tough but overmatched Victoria Bustos en route to a 10 round clean sweep on all cards.

Bustos (23-7, 0 KO) never went full retreat or surrender, throwing back and giving a proud effort despite heavy bruising and damage around both eyes. But, Cameron (16-0, 8 KO) was only facing her because a planned undisputed unification against Kali Reis was scrapped due to unspecified health issues that have prevented Reis from fighting or training.

Bustos was throwing and pushing forward all the way to the final bell, but all judges scored every round for Cameron. Afterwards, Cameron said she’d still like an undisputed fight with Reis, but also feels ready to move up for a fight against Jessica McCaskill.

Anyone who didn’t catch this fight live would be well rewarded for watching a replay. Alen Babic and Adam Balski gave us an absolute brawl, a ten round hockey fight with constant hooks and uppercuts flying in both directions.

Babic piled up rounds afterwards, constantly pushing through anything Balski threw at him to trap Balski on the ropes and in the corners. Balski spent much of the fight absorbing three or four punches for each one he’d return. And while Babic did slow down as the fight progressed, the effort never truly drained his gas tank even as the fight went to a distance he’s never experienced as a pro.

Things turned dramatically at the end of the 9th round, when Balski caught Babic with a late punch that rocked Babic and left him looking disoriented. I didn’t think it was dirty or intentional in real time, as the punch released right at the bell and at the end of a combination from Balski. Watch, and decide for yourself:

The referee paused the action at the start of the 10th round to deduct a point for the late punch, but Babic still looked dazed and unsteady despite the extra time to recover. Balski nearly punched himself out trying to take advantage of the opportunity, but Babic kept his feet and eventually found enough of his wits or instincts to inflict some punishment on Balski. Both men closed with a flurry of hooks to give us a thrilling finish to an amazing fight.

Babic sees his KO streak end, but answered any questions about his ability to sustain an aggressive, power-heavy style through the full distance. It wasn’t a tactical clinic, but it was a supremely entertaining display of caveman violence and aggression. Well worth your time.

A very impressive start-to-finish performance from Ellie Scotney, who advances to 5-0 with a clear and controlled victory over Cecilia Roman. Roman (16-7-1, 0 KO) gave a good show, but Scotney kept the distance where she wanted it and looked brilliant landing clean shots while largely slipping or blocking Roman’s return fire.

Roman made a case for the 5th round, charging forward and having her greatest success of the night. But, one of the official judges didn’t even give her credit for that much, with final scorecards coming in at 100-90 and 99-91 x2.

After the fight, Scotney called out Ebanie Bridges and said she was willing to drop to bantamweight to make it happen.

The opener was a well matched affair between two very capable professionals, and ended in the very rare uncontroversial split decision.

Robbie Davies Jr (23-3, 15 KO) had difficulty early in closing the gap to do work against Javier Molina. Davies caught several hard hooks and counters in the early rounds whenever he couldn’t corral and keep Molina (22-5, 9 KO) against the ropes.

Davies adjusted, then Molina adjusted to those adjustments, and the fight was a solid back-and-forth affair. Molina landed a huge shot on Davies late in the 8th round that took the legs away from Davies, but he managed to survive the round and came back strong to win the 9th on my unofficial card.

Molina didn’t press in the 9th or 10th rounds, seeming content to carry the fight to the final bell. It probably cost him this fight as Davies was able to rally back. The judges had it 96-94 twice for Davies, with the third card 97-94 for Molina. None of those scores were unreasonable, though Bad Left Hook also unofficially had it 96-94 for Davies.