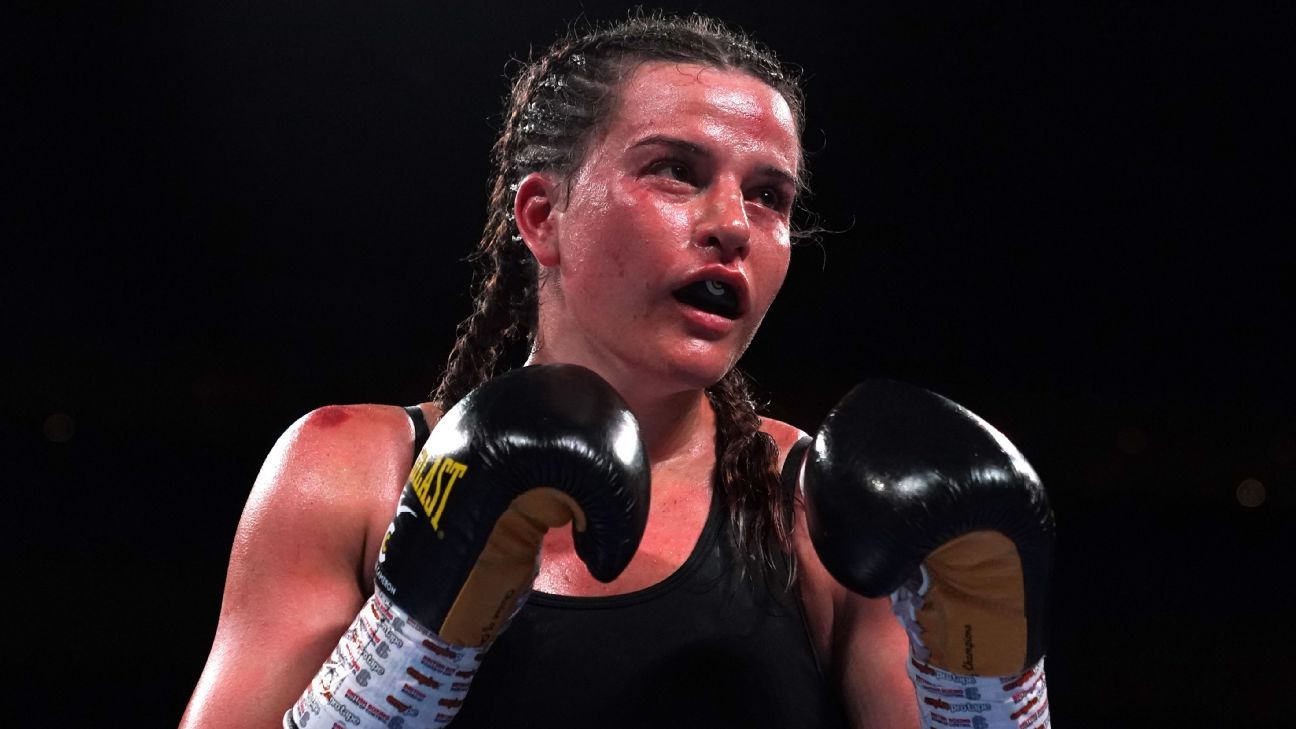 Chantelle Cameron hopes a successful defence of her world junior welterweight titles on Saturday sets up a megafight against either Katie Taylor or Kali Reis later this year.

The English boxer will put her WBC and IBF world junior welterweight belts on the line against fight Victoria Bustos at the O2 Arena in London, England, on the same bill as the light-heavyweight bout between Joshua Buatsi and Craig Richards.

Cameron (15-0, 8 KOs), 30, is willing to drop down a division to face Taylor, the undisputed world lightweight champion who outpointed Amanda Serrano in a clash of two of the best fighters in women’s boxing in April.

Taylor (21-0, 6 KOs), 35, from Ireland but based in Connecticut in the United States, is promoted by Matchroom like Cameron, who earlier this year was linked with a clash against American Reis (19-7-1, 5 KOs), 35, from Rhode Island, to decide the division’s undisputed champion.

Cameron wants to face Taylor, after missing out on the fight while she operated at lightweight.

“I’ve always said I would love that fight with Katie. I was her mandatory at lightweight, but I was pushed aside a few times. I never secured that fight and to create my own chances in the weight division above because I didn’t want to stall my own career,” Cameron told ESPN.

“I love Katie, I think she’s a legend, but I think I can beat her because of my style. She is fast and she can box, her footwork is unbelievable and she can box, but if I see her in trouble I would stick it on her and I wouldn’t take my foot off the gas.

“I think she won the fight against Amanda, but it was close and a really good fight. It could have gone either way. Amanda had her in serious trouble in the middle of the fight and that shows what a good champion she is Katie, to come back from that and not give in. Katie deserved the decision.

“I don’t think it’s Katie — she will fight anyone — so it must be the team around her that don’t fancy the fight with me. I would always love to fight her.

“She’s a great champion and has done a lot for women’s boxing. But if you are the best you want to challenge yourself against the best. I want to see how good I am, but they know I’m a threat because I am a big lightweight, I come forward, box and am all wrong for Katie.

“Eddie Hearn has said a few times that I would be fighting the winner of Taylor-Serrano, so let’s see. Mikaela Mayer is a wicked fighter and if it makes sense I will fight anyone. If they have got a belt I want to test myself.”

Cameron faces Bustos (23-6, 0 KOs), from Argentina, after a fight with Reis fell apart.

“Bustos was a great champion and has been in there with all the best names and if I overlook her it would be detrimental to my career and everything I want to achieve,” Cameron added.

“Everything in the future, I can’t really think about, but hopefully the fight with Kali will happen. I was entered into a tournament for undisputed with Kali Reis [WBA and WBO champion] and we were due to meet in February/March but Kali has had some health issues and I don’t know now if it will happen. This title defence is for me to make a statement and keep active.”

Richards lost a unanimous decision in a WBA champion Bivol and has the experience of boxing for a world title over Buatsi, but his south London rival is favoured to win after stopping all but two of his opponents.

“I’ve been in the States since January, so it’s been a long camp, but I keep saying that there’s a price to pay and that is how I do it.

“I prefer being in the America, primarily because of the distractions that come from being at home and in your comfort zone.

“After this, it must be a world title shot. We have been saying for a while ‘the next one, the next one’ and I am ready. There are still big fights on the domestic scene like Anthony Yarde and Callum Smith, and when the timing is right, I’m sure we’ll cross paths.”