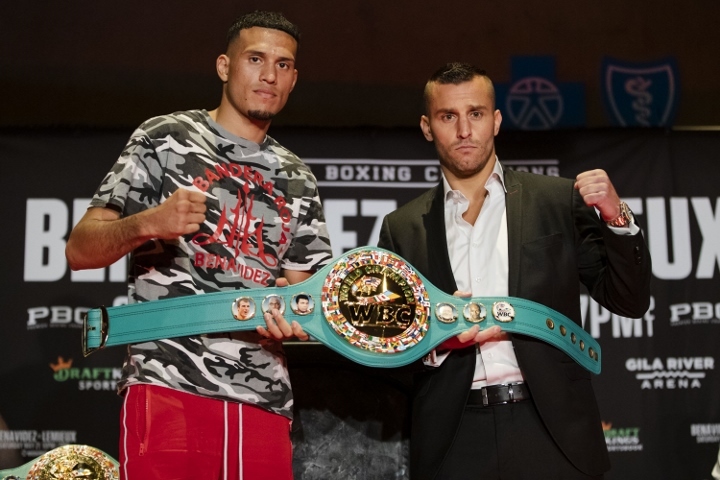 25-year old David Benavidez (25-0, 22 KO) might not have Super middleweight champion Saul Alvarez in his sights in 2022, but 2023 could be a whole different story. As long as he keeps winning, the ultimate star making opponent is an option, especially with Benavidez maintaining a good relationship with the WBC.

Their interim belt is on the line against 33-year old former IBF middleweight titlist David Lemiuex (43-4, 36 KO) in a fight that might not last long. No matter how long it lasts, this is a puncher duel sure to deliver fireworks. 24-year old Cuban Jr. middleweight Yoelvis Gomez (5-0, 5 KO) is also in action against veteran Jorge Cota (30-5, 27 KO).

Additional Shows to Watch For

Jr. middleweight action airs live from Spain. 30-year old Kerman Lejarraga (34-2, 26 KO) has won six in a row since a first round loss to David Avanesyan. Both Lejarraga losses are by stoppage. 33-year old James Metcalf (22-2, 14 KO) has a single win since consecutive losses that included his lone knockout loss to Ted Cheeseman.

ESPN has two interesting scraps on paper. In the main event, 29-year old middleweight Zhanibek Alimkahnuly (11-0, 7 KO) will take a step closer to the titled ranks with an interim WBO strap up for grabs. The Kazakh will face 30-year old Danny Dingum (14-0-1, 8 KO) with a prime time audience there to see if he can make a statement. Also on the card, 36-year old former Jr. lightweight titlist Jamel Herring (23-3, 11 KO) will try to stay in the mix against a fresh hopeful. 26-year old Jamaine Ortiz (15-0, 8 KO) has a chance to arrive on a big stage.