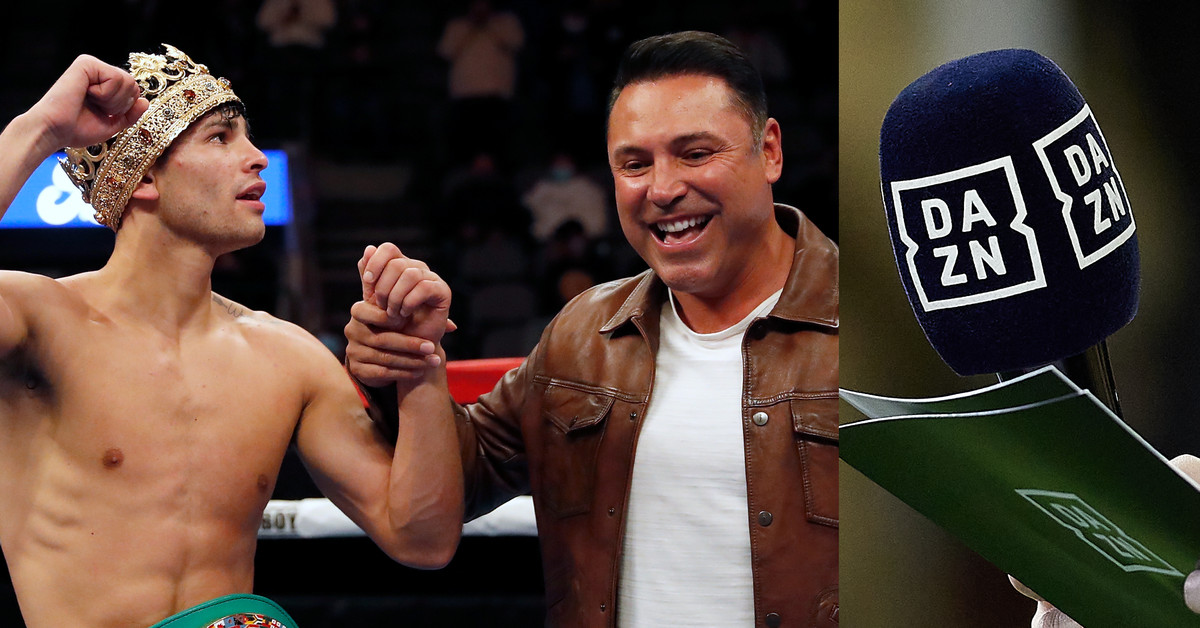 DAZN and Golden Boy have announced a “multi-year, multi-fight” renewal of their partnership, which began in 2018 with a five-year deal, and the announcement also noted that Ryan Garcia will be returning to the ring in July.

Golden Boy joined the DAZN team in 2018, then boasting Canelo Alvarez as the ace of their stable after HBO shut down boxing operations, opening the door for DAZN to come into the market with some star power.

But it’s hard to argue that Golden Boy hasn’t been a clear No. 2 for DAZN’s boxing offerings other than Canelo, and the promotional company’s partnership with Alvarez ended in ugly fashion in late 2020. Canelo was also officially out of his DAZN deal by then, but he has continued to fight on the platform other than one bout with Premier Boxing Champions in 2021.

There had been a lot of speculation that Golden Boy was looking for a new partner, with Triller at one point noted as a possible new business relationship, after De La Hoya had flirted with the company for what wound up an abandoned comeback idea.

Since then, Triller have proven unreliable at best, incompetent at worst when it comes to putting on boxing shows that don’t feature Mike Tyson exhibitions (and that’s not happening again) or Jake Paul (who left for Showtime in 2021).

“We are delighted to extend our partnership with Golden Boy,” said Ed Breeze, EVP Rights, DAZN. “Golden Boy has an excellent stable including some of the hottest prospects in boxing, and their shows always feature non-stop action from the first bell to the last. As part of our new partnership we will be looking to unearth the next generation of boxing talent in our new development series ‘Golden Boy Fight Night on DAZN.’”

So far in 2022, Golden Boy’s four true A-side fighters have faced or been slated to face opposition that has been knocked heavily, with understandable reason.

Munguia fought D’Mitrius Ballard in February, and will face Jimmy “Kilrain” Kelly — on paper an even worse opponent — on June 11. Garcia returned from a long layoff to win a decision over Emmanuel Tagoe in April, a fight that had some interest going in and very little after the fact. Ortiz had been slated to face Michael McKinson, a fight that was scrapped after Ortiz had a bout with rhabdomyolysis. And Zurdo Ramirez recently fought what wound up a terrible mismatch with Dominic Boesel, while DAZN and Golden Boy spent fight week hyping up his undefeated record.

Still, Golden Boy do have those guys, and all four of them can be marketable stars. Garcia is just 23, Ortiz is 24, Munguia is 25, and Ramirez is 30. There is time left for each of them in their prime years, and even to simply enter their true prime years. And two of them — Munguia and Ramirez — could be attractive opponents for Canelo, if Canelo is ever willing to work with Golden Boy again.

In other words, even if Golden Boy aren’t producing what everyone might want right now, there is a pretty obvious long game to play here, and DAZN are willing to see it through and gamble on the company producing some stars.

To that end, Golden Boy do develop prospects pretty well even if they don’t really get “blue chip” type signings anymore, and their “Golden Boy Fight Night” cards can be very fun when they bother to put in the effort for a well-matched main event, or at least breezy and easy to watch when they don’t.

So while it’s easy to criticize what Golden Boy have produced for DAZN, especially recently — and heaven knows I have — it’s also not hard to see what DAZN are thinking in re-upping with the company. There is major money potential if things go as they should or at least could, and boxing can be a funny sport, anyway. You never know when a promoter who has struggled for a bit might get a shot in the arm in some way or another, produce an unexpected superstar, or simply sign the right “unknown” young talent who winds up being a big deal. Golden Boy have weathered some storms and some lean times before, and they’re still around and kicking.