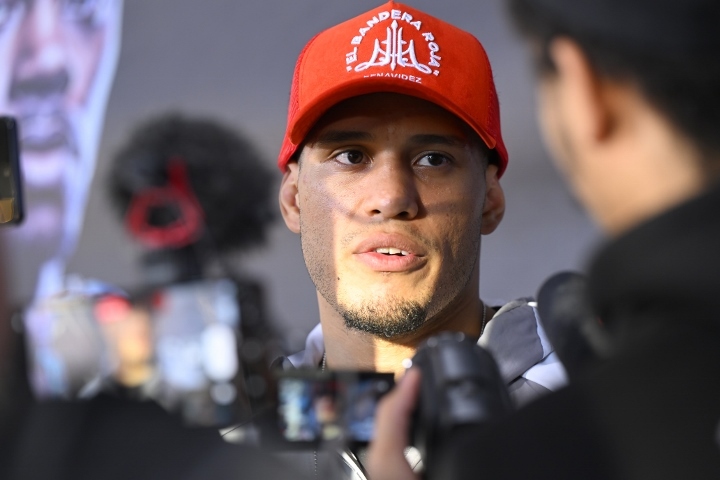 David Benavidez has bad news for anyone waiting out a growth spurt that would force him out of the super middleweight division.

The show marks the second straight in the greater Phoenix area for Benavidez, who grew up in this region. More important than another homecoming, the winner will become the WBC mandatory challenger to current undisputed WBA/WBC/IBF/WBO champ Saul ‘Canelo’ Alvarez (57-2-2, 39KOs)—one of several stated targets on Benavidez’s list of must-have fights before thinking about a run in the light heavyweight division.

“I think right now it’s smart for me to stay at 168 for another two or three years, especially after I get this belt,” Benavidez told BoxingScene.com. “I feel like it will be smarter for me to stick around and get these fights that I want. “Once I get this belt, I’ll have more leverage to make these fights happen. So, until I get Caleb Plant or [Jermall] Charlo, Boo Boo Andrade or Canelo, I don’t see myself leaving this weight class.”

Benavidez (25-0, 22KOs) has long called for showdowns with at least three of the named opponents. There existed a long time rivalry between Benavidez and Plant (21-1, 12KOs) both before and during their respective WBC and IBF title reigns. Benavidez had a recent run in with Charlo (32-0, 22KOs), the current WBC middleweight titlist who previously spoke of moving up in weight to face Alvarez but who has yet to entertain the idea of a Benavidez fight.

A dream fight with Alvarez goes without saying. Benavidez called for such a fight since becoming the number-one contender in 2021, months after losing his WBC belt outside the ring due to missing weight ahead of an August 2020 knockout win over Alexis Angulo. The development prompted a suggestion from the WBC for Benavidez to campaign at light heavyweight, though it came across as a ploy to allow Alvarez a clear shot at the vacant title which ultimately became the case.

Nevertheless, Benavidez instead treated the instance as a teachable moment to better control his own destiny.