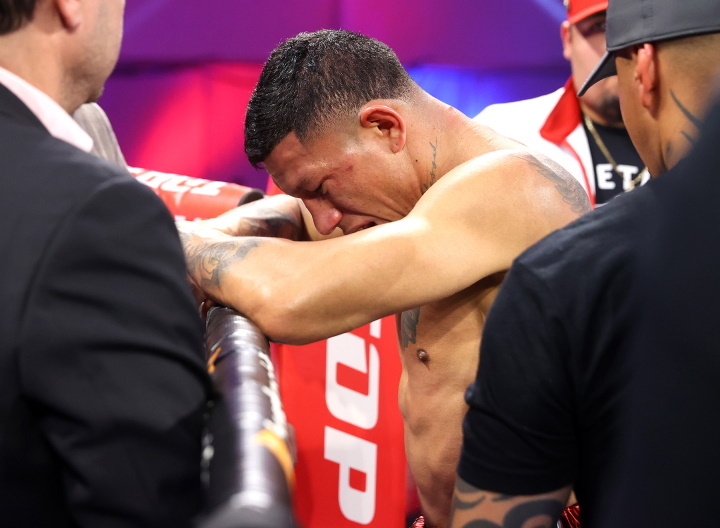 Luckily for the former WBC super featherweight champion, a Nevada State Athletic Commission doctor and referee Russell Mora saved the courageous Berchelt from himself. Nakathila battered Berchelt, who was almost a 6-1 favorite, with right hands for most of what amounted to a one-sided beatdown that ESPN televised as its main event from Resorts World Las Vegas.

Namibia’s Nakathila knocked Berchelt to the canvas with a combination in the third round. He continued to hammer him with right hands that wobbled Berchelt numerous times, including one flush shot that knocked Berchelt’s mouthpiece out late in the sixth round.

Berchelt never really seemed to have his legs under him after suffering the aforementioned knockdown. He suffered his second straight loss inside the distance 13 months after Oscar Valdez viciously knocked him out in the 10th round of their 130-pound championship match in February 2021 at MGM Grand Conference Center in Las Vegas.

Mexico’s Berchelt (38-3, 34 KOs) had hoped to reinvent himself as a lightweight contender against Nakathila (23-2, 19 KOs), who produced by far the most noteworthy win of his career. Moving up from the 130-pound division to the lightweight limit did little to help Berchelt perform better than he did the night Valdez dominated him.

“I’m a little bit surprised,” Berchelt said of the stoppage. “I thought I was in a condition to continue, but the referee decided to stop the fight. He’s the ultimate authority. I have to respect that, but I wanted to continue.”

The 30-year-old Berchelt’s surprising upset defeat to Nakathila seemingly ended his respectable run as a championship-caliber boxer. The Cancun native indicated, however, that he isn’t ready to retire.