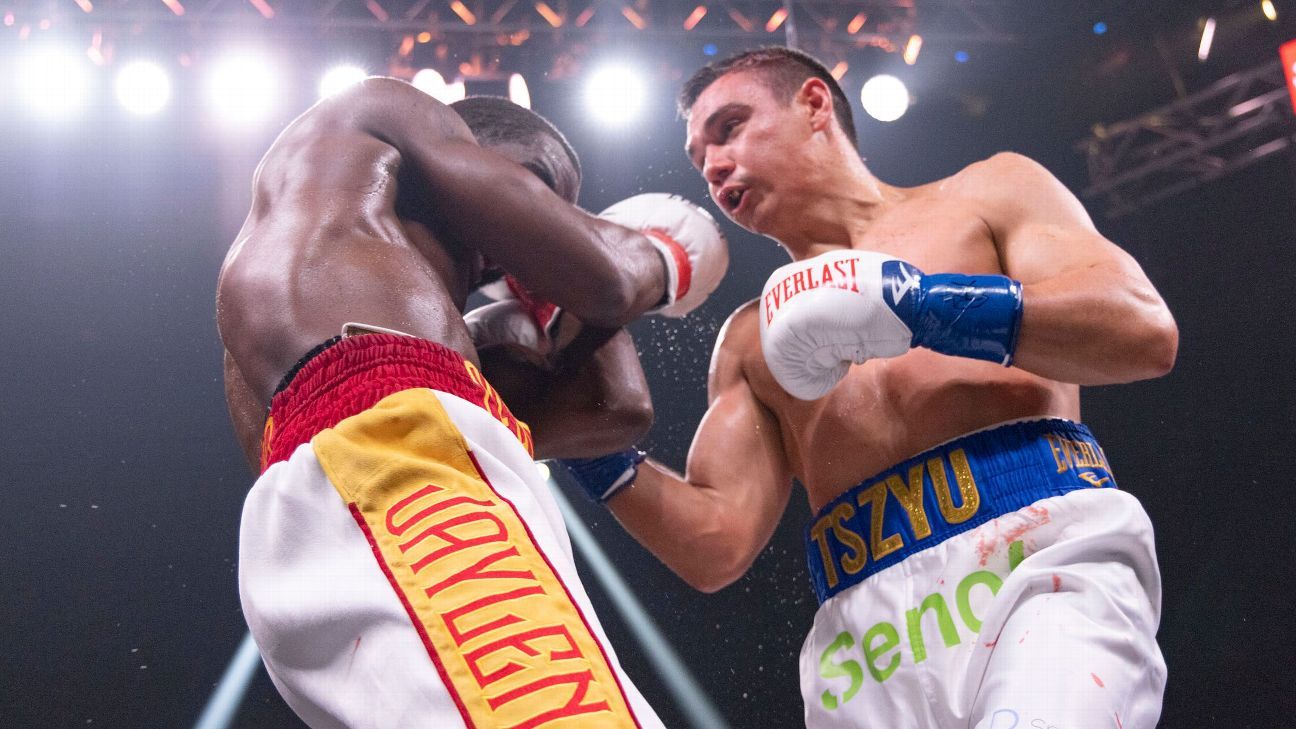 Australian boxing star Tim Tszyu has announced his arrival on the international stage with a unanimous points decision over Terrell Gausha in his much-anticipated US debut in Minneapolis.

Tszyu was dropped in the opening round before recovering to win over the trio of American judges and claim a brave victory in his all-or-nothing world title eliminator on Saturday night (Sunday AEDT).

The Sydneysider’s hard-earned victory leaves him on track for a world-title shot at the winner of the May 14 unified rematch between American Jermell Charlo and Argentina’s Brian Castano.

“I’ll be watching and I’m coming for the two boys. Whoever wants it, come get it,” a jubilant Tszyu said.

But while he preserved his unbeaten record from 21 fights, Tszyu knows he must improve after his defences were exposed by the former Olympian Gausha.

“It’s simple, a flash knockdown. Right on right. Got me on perfect timing,” Tszyu said.

“Look, it was good that I faced adversity for the first time and I was able to come back.

“I dug deep. All respect to my opponent, Terrell Gausha. He’s one hell of a warrior and he’s just a true gentleman.”

Tszyu certainly showed great courage to climb off the canvas and continue pushing forward trying to attack the American, who himself has never been floored in his own 24-fight career.

He struggled to penetrate Gausha’s renowned defence until hurting him with a series of body blows in the fourth round.

The onslaught from Tszyu continued in the fifth, unleashing the power to literally have Gausha on the ropes.

Trying to hang on, a desperate Gausha was warned for holding in the sixth round before winning the seventh after landing two more lethal rights to Tszyu’s head.

Australian boxing legend Jeff Fenech lauded Gausha for his “amazing courage” to stay on his feet and Tszyu’s failure to land a knockout blow threatened to cruel his world title dream.

“I was just enjoying myself. I felt in control the whole time,” Tszyu said.

“I kept the pressure on. I wasn’t going to back down. I kept landing shots.

“I thought ‘f*** it, I’m going to keep coming forward and keep fighting.

“I didn’t take one step backwards.”

After beating all comers from Australia and Japanese warrior Takeshi Inoue in his previous bout, Tszyu was taking Australian boxing’s famous family name global for the first time since his world championship-winning father Kostya took out Sharmba Mitchell in his 15th and final fight in the US 16 years ago.