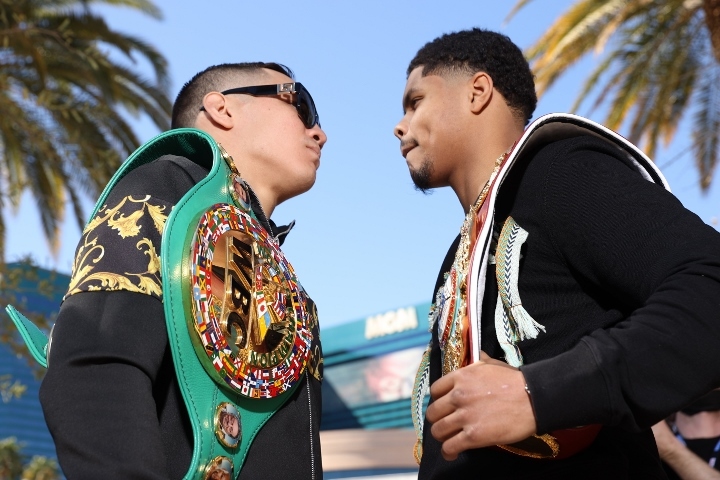 The championship unification matchup between Shakur Stevenson and Oscar Valdez features two undefeated junior lightweight titlists who are the best 130-pound fighters in the world.

Both boxers are promoted by Top Rank, and although Stevenson is the sizable betting favorite, he will not be paid as if he is an A-side fighter.

In an interview with ESPN reporter Mark Kriegel during the broadcast of the card headlined by Miguel Berchelt vs. Jeremia Nakathila on Saturday night, the New Jersey native Stevenson said that he’ll be earning the smaller purse when he steps into the ring at the MGM Grand in Las Vegas on April 30 on ESPN.

“I’m betting on myself. I feel like when you bet on yourself it always works out in the way that you want it to work out. This might be my first and last time doing this [by taking less money]. I feel that I am going to be a superstar later on. I probably will never have to do this again. But right now, we’re going to do whatever it takes to make the biggest fights happen,” said Stevenson.

“On April 30th you’re going to see a superstar be born. I feel that I shine in my biggest moments. Pressure either busts pipes or it makes diamonds. I’ve been a diamond my whole career. My biggest moments I always step up.

“I feel like I am the best fighter in the world. I haven’t gotten the chance to really prove it yet. But April 30th is going to be another stepping stone in proving that.”

The 24-year-old Stevenson (17-0, 9 KOs), the WBO champion, and 31-year-old Valdez (30-0, 23 KOs), the WBC crownholder, have been on a collision course to fight one another ever since Valdez was a WBO titlist at 126 pounds and Stevenson was his mandatory challenger. Valdez ultimately vacated his title in 2019, moved up to 130 and bested Berchelt in a knockout of the year slugfest in 2021.

Stevenson would end up collecting Valdez’s vacant belt before moving up to 130 pounds himself.

“I feel that he has ducked me since I was his mandatory at 126. I felt that he had the biggest fight there. I feel that they offered him a lot of money and he said ‘no’ and moved up to 130. Now that he goes to 130, it seemed like he didn’t want this fight either, but we’re here now. He took the fight, so you have to respect it,” said Stevenson.

“I definitely thought Berchelt was going to win that fight [against Valdez] but I never looked at Berchelt like a boogeyman. I always knew that he was just a come-forward type of fighter, put pressure, no defense. Valdez capitalized on that.”

The slick southpaw Stevenson believes he’s levels above Valdez, and he’s looking to prove it across all phases when they meet.

“I feel like my punching power [is underestimated]. My physical strength. I feel like everything is underestimated about me when it comes to that. I feel that I am a lot stronger than people think. People don’t realize that until they get in the ring. You don’t see anybody walk through me,” said Stevenson.

“He’s going to try to press me and fight his hardest. I’m the better fighter, more skillful fighter. April 30 I am going to become a superstar.

“Anything is possible, but don’t look past me knocking him out.”