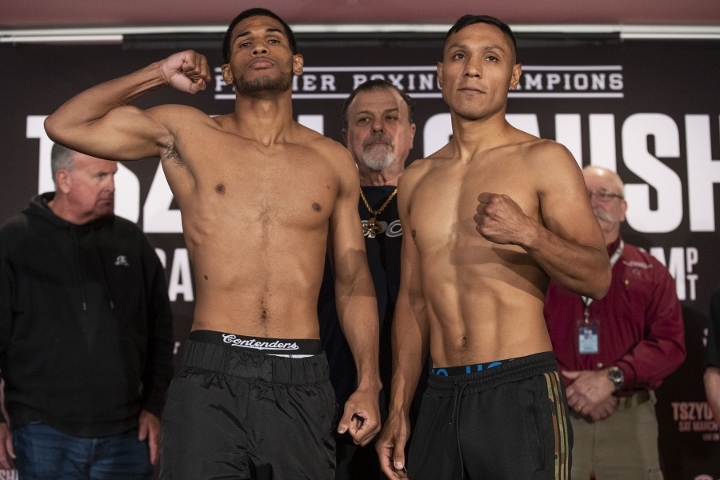 MINNEAPOLIS – Elvis Rodriguez was one more win away from cementing top honors as the 2020 Prospect of Year.

Five knockouts in as many fights on the year saw the Dominican junior welterweight emerge as a must-watch talent, all complete with his air-guitar strum at the end of each win. A positive Covid test resulted in his having to withdraw from a planned December 2020 appearance in Las Vegas, ending his year on a whimper and his career taking nearly a year to rebuild.

Rodriguez was forced to go the distance in an uninspiring eight-round win last February, followed by a disappointing showing in an eight-round loss to Kenneth Sims Jr. last May. The fight was the last for Rodriguez under Top Rank, resurfacing with Premier Boxing Champions (PBC) under whose banner he fights for the second straight time this weekend.

“The loss (to Sims) motivated me to return to the gym and work even harder,” Rodriguez told BoxingScene.com ahead of his scheduled ten-round bout with Juan Jose Velasco this Saturday at The Armory in Minneapolis, Minnesota. “I proved it in my last fight against a world class opponent and am prepared to do it again. My hand will be raised in victory on Saturday night and then the air guitar will come out once again. ”

Dominican Republic’s Rodriguez (12-1-1, 11KOs)—who trains under Hall of Fame cornerman Freddie Roach at Wild Card Boxing Club in Hollywood—made an impressive PBC debut, earning a fifth-round knockout of 2016 Mexican Olympian and then-unbeaten prospect Juan Pablo Romero on the Canelo Alvarez-Caleb Plant Showtime Pay-Per-View undercard last November at MGM Grand Garden Arena in Las Vegas. Saturday’s bout with Velasco (23-2, 14KOs) will mark Rodriguez’s first outside of Vegas since the pandemic, though the 26-year old southpaw has hit the Midwest with the same confidence and swagger that has always surrounded his career.