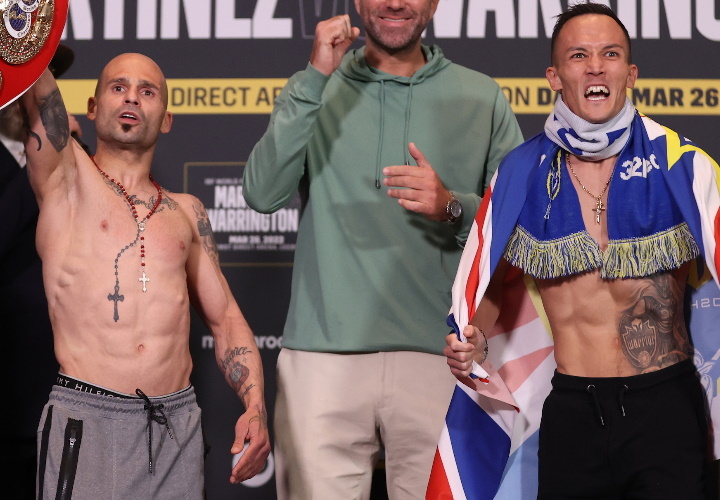 Just shy of five years ago, they collided and their careers went in very different directions for a time. Fate could have played out differently.

Kiko Martinez thought he did enough to win in 2017 at the First Direct Arena in Leeds. Leeds native Josh Warrington got the nod and moved on within a couple fights to win his first major title.

What looked like a crossroads fight at the time has turned out to be an intersection. 2021 happened for both men and now it’s Martinez on the up and Warrington scrambling to hang on. Martinez won the IBF belt last year from Kid Galahad, a belt Warrington vacated before a surprise loss to a then-unheralded and widely unranked Mauricio Lara. Martinez defends his fresh honors Saturday (DAZN, 3 PM EST) in a rematch set to take place at the same location of the first clash with Warrington.

Let’s get into it.

The Pick: Yes, Martinez had a strong performance in the first Warrington fight and the win over Galahad. Yes, Warrington is coming off the struggles against Lara in both a loss and what appeared to be another one coming before a cut shortened affair. There are still more reasons to like Warrington in this fight assuming he’s not just a case of lost punch resistance. Warrington is a more active offensive fighter, a little quicker, and if the fight is close it appeared to matter the first time and could here. Home court is a real thing. Warrington doesn’t score a lot of stoppages here but the younger man is fighting for his career here and that’s extra motivation. Martinez has a motivation too. Martinez easily could have had the win the first time and has the ease of knowing he’s not supposed to be in the champion’s seat anymore at this stage. He has the power to win but it feels like lightning already struck for the veteran. The pick is Warrington by competitive, perhaps close, decision.