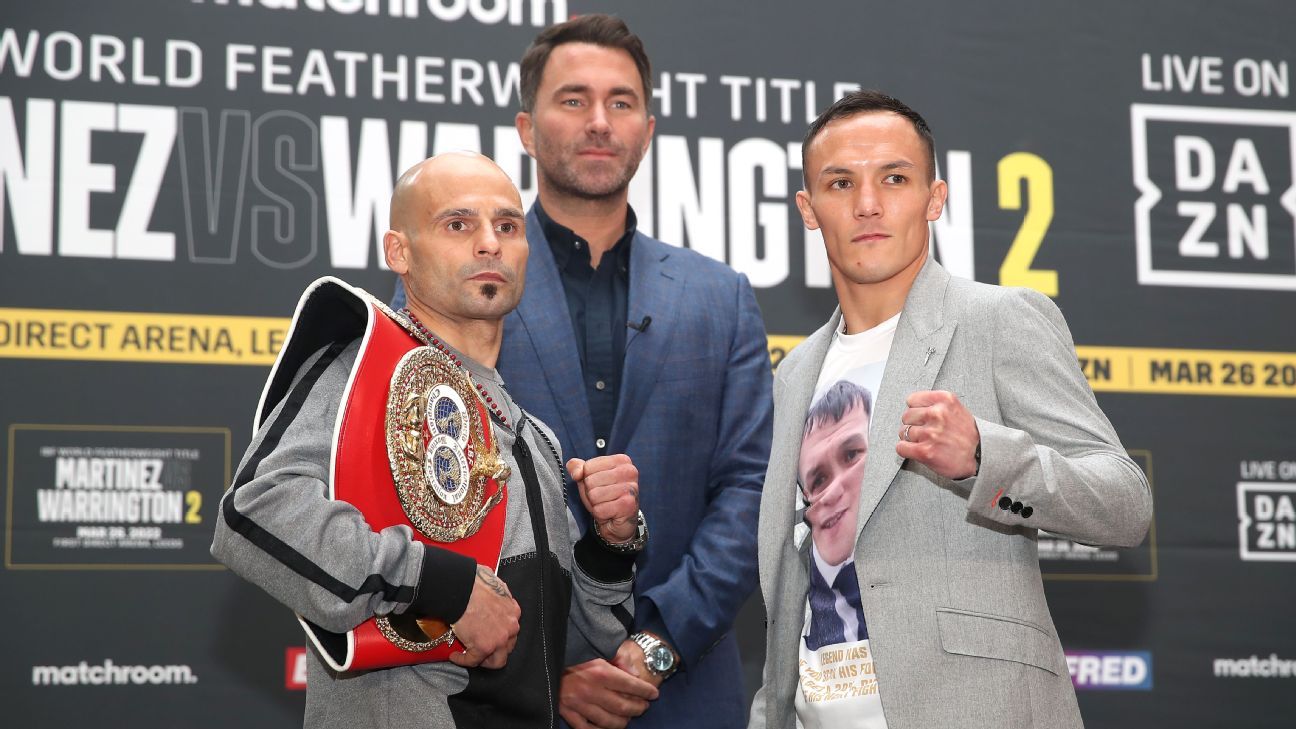 Josh Warrington is confident he can emulate Saturday’s opponent Kiko Martinez’s reversal of fortune and turn his career around to become a two-time world champion.

Martinez (43-10-2, 30 KOs) had mixed results since his previous reign as world champion ended in 2014, but the 36-year-old surprised many with a stunning sixth-round TKO victory over Warrington’s English rival Kid Galahad to win the IBF featherweight world title in November.

Warrington suffered the first loss of his career in February 2021 when he was demolished by Mauricio Lara in nine rounds in what was supposed to be a warm-up fight. Warrington (30-1-1, 7 KOs), 31, whom voluntarily relinquished the IBF belt before the Lara fight, was left frustrated when a rematch with Lara was stopped and ruled a two-round technical draw after Lara suffered a cut over his left eye due to an accidental head clash.

“I’ve had slip-ups in the last year but it’s time to get on top now,” Warrington said on Thursday. “It reminds me of four years ago when I first became world champion, I have the same sort of energy for a fight.”

Martinez, from Alicante, Spain, will make his first defense in front of 12,000 of Warrington’s home city fans at the First Direct Arena in Leeds, England, looking for revenge. In 2017, Martinez lost a majority decision to Warrington at the same venue.

“This sport goes in circles,” Warrington said. “We were meant to be sparring partners for the Lara fight, and then [Martinez] is gone on to win the world title and he wants me as his first defense.”

Despite having 10 career defeats, including stoppage losses in previous shots at the featherweight title against Gary Russell Jr. (2019) and Leo Santa Cruz (2016), Martinez became a two-weight world champion. He predicts another knockout win on English soil this weekend.

Warrington made three defenses of the IBF belt from 2018 to 2019, including a unanimous decision win over former featherweight champion Carl Frampton.

“Kiko has mentioned it’s win or retire for him,” Warrington said. “I’ve just focused on winning and having my hand raised.”

Martinez, who made two defenses as IBF junior featherweight champion from 2013-2014, said that he has gotten better since they fought the first time.

“Five years ago we shared some hard rounds, but that was five years ago,” Martinez said. “I will be ready for whatever he brings Saturday night.”

The winner of Saturday’s fight could get a clash with England’s Leigh Wood, who recently knocked out Northern Ireland’s Michael Conlan to retain his WBA “regular” featherweight title.