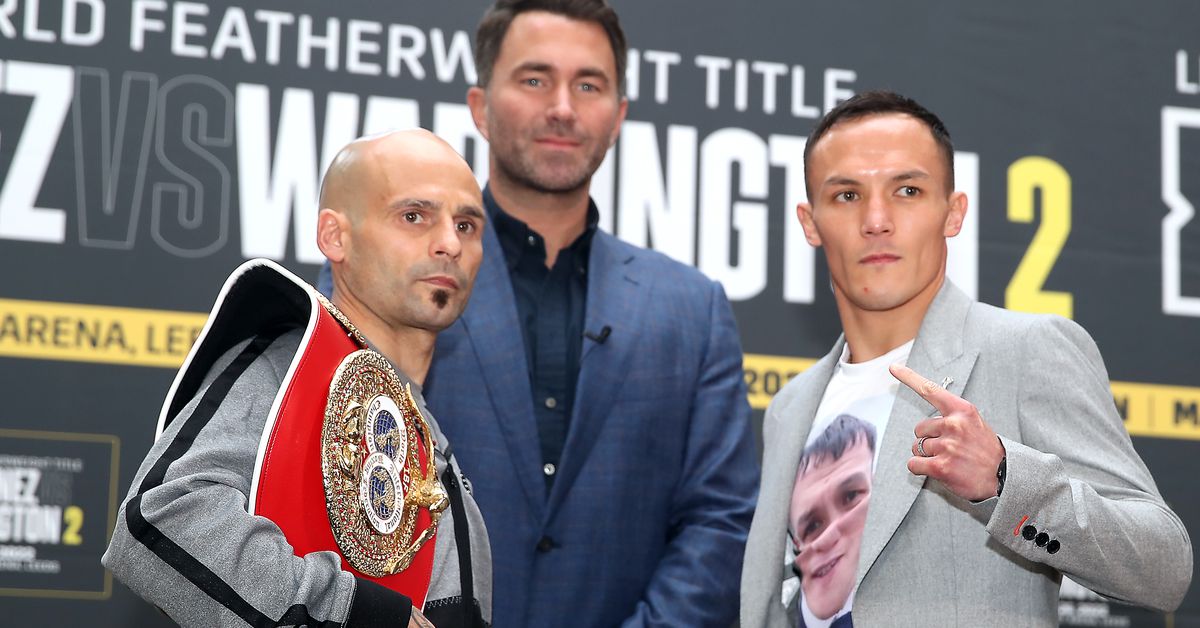 Saturday will have a trio of televised events that we’ll be covering live, and two of the shows even have main events we’ll talk about and make predictions for here!

In the first, Kiko Martinez takes on Josh Warrington in a rematch, with Warrington holding home field in Leeds, England, and Martinez defending the IBF featherweight title. In the second, Tim Tszyu makes his U.S. debut in a 154 lb main event against Terrell Gausha.

Who wins? We’ve got our great picks in!

Listen, I know my overall record here stinks. But I’m 5-1 in our last six picks. Yes, so are Wil and John, and Patrick is 6-0, but — man, come on, give me something here. I’m competing again at least. I dug myself a hole but I’ve fought back a little. We love that, don’t we? We think that’s great!

My thought on this matchup have jumbled this week the more I’ve thought about it. At first, I was quick to say Martinez is here because he landed a game-changer shot on Kid Galahad last November. Galahad was dominating that fight for just about five full rounds but he got lazy and got caught. Fair play to Martinez, he landed the punch he needed and made it count. It’s not a “cheap” win, he did his job. And while I think there’s some truth to that not being an indicator that the 36-year-old Martinez is suddenly top tier after years of being groaned at when he’d get big fights again, where is Warrington at, exactly?

Warrington edged a majority decision at this same Leeds venue against Martinez in 2017. Kiko’s probably gotten a bit worse with age since then, but is Warrington better now than then? He was mauled by Mauricio Lara just over a year ago, and their rematch last fall didn’t get past two rounds thanks to a bad cut on a clash of heads. We got to learn nothing about where Josh was in that fight.

So my first paragraph leads basically to this one, where I’m throwin’ another dart into the heavens. I’m going with a Kiko win, and by stoppage, because I don’t think he’s getting the cards in Leeds. This could be DEAD wrong; if Warrington is back on form and feeling good at home, he could win a decision here pretty handily. But I love the Kiko story, and I’m a gambler. Martinez TKO-9

Kiko Martinez scored a really nice upset win over Kid Galahad last November and while that might turn out to be the highlight of his career, he’s now set to go back up against Josh Warrington who already beat him a few years back. Now it’s not like Warrington completely dominated that fight or anything, but I can’t help but think that father time will only separate the two more at this point.

Martinez is 36 years old and while I think he probably really wants to do certain things to pull off the victory, I question whether or not his body will be able to keep up. That’s a common occurrence for aging fighters in general and I think Warrington at 31 is in place to be a bit more lively in this fight, and will utilize the experience from their first fight to widen the margin in this outing. Warrington UD-12

The nice thing about Anyone vs Anyone Else 2 is that we’re not just making assumptions. If the original result is a sound one, you have a pretty clear idea of what needs to change, or else a preview of what’s likely to happen again.

Kiko Martinez feels he was robbed when he lost a majority decision to Warrington five years ago. You may agree; more than a few very vocal people saw that fight for Martinez. Martinez also caught Kid Galahad’s exposed chin in a remarkably similar way to the fight-changing punch that spelled the beginning of the end for Josh Warrington against Mauricio Lara. Even if you hold with the official ruling of a Warrington victory in the first fight between these two, there’s definitely a recent blueprint for how Warrington can be stopped, and of Martinez doing exactly what it takes.

I’m skeptical, though. Martinez previously rematched Carl Frampton and Rendall Munroe, and his second chances after those losses ended in repeats rather than revenge. And there’s good reason both Warrington’s loss to Lara and Martinez’s win over Galahad were shockers.

It’s awesome that a 36 year old Kiko Martinez is a world champion. The fight that did it was fun to watch, and no one can take that achievement away from him. Someone inevitably will take that belt from him, though. And I think it’ll be Josh Warrington, this weekend. Warrington UD-12

To reuse a thesis I trotted out for an older fight, which I’m almost certain was Rey Vargas vs. Tomoki Kameda, Kiko Martinez being a much sounder boxer than Mauricio Lara might actually work against him. “Bronco” was ready, willing, and able to let Warrington unload combinations on him in order to launch bombs while the latter’s hands were busy. Warrington’s defense is generally sound; he does a good job of protecting his chin after a flurry and recognizing when incoming shots are going to the body, meaning he’s only truly vulnerable as he’s landing shots. Martinez’s self-preservation is going to give him far fewer opportunities to land that game-changer, and despite that knockout of Galahad, I’m not convinced he’s got enough thump to discombobulate Warrington the way Lara did.

Kiko’s definitely got a chance, but Warrington’s superior hand speed and combination punching should let him dominate the exchanges. Expect Martinez to ding him once or twice before ultimately dropping a clear decision. Warrington UD-12

I really like this as a matchup for young Tszyu, who is highly regarded despite a pretty thin — but not awful! — resume so far for a couple reasons. One is that he clearly does have some talent, has a nasty body attack, has good power, big guy at 154, he can fight. He passes the eye test in most ways. But the other is that 154 has sort of eaten its own tail in the last couple years with contenders falling by the wayside. Part of that has been that top fighters have actually fought each other, which is welcome and good.

I think Tszyu wins here, but Gausha is the right sort of test for him at this stage. The ex-Olympian brings more to the table than Takeshi Inoue or Steve Spark or Bowyn Morgan, and while Dennis Hogan can be awkward and Jeff Horn is gritty, Gausha is better than those guys, too. Gausha doesn’t have the huge power, but he’s also not feather-fisted, and if he catches Tszyu with a counter, it could be something. I think Gausha competes but just doesn’t do enough; we saw it against Lubin and Lara, I think we see it again, but he gives Tszyu valuable rounds — and I think Tim steps it up late and forces a stoppage, maybe one that didn’t need to be. Tszyu TKO-11

I’ve got to be honest here, I’ve never been all that enamoured by Terrell Gausha. He’s a hard worker with middling talent who I think is good enough to give really good fighters at least a little trouble but not really good enough to really beat the upper echelon of opponents. Add in the fact that Gausha himself is probably past his best days while Tszyu appears to be entering his prime years and I can really only see this fight going one way.

Perhaps if Gausha had more concussive power I might think he’d have a better chance of pulling off a longshot, but I think he clearly loses this fight. And while I think Gausha might go into survival mode at some point to spare himself from getting knocked out, I think he comes up short just the same. Tszyu UD-12

My first and primary take on this fight is that there are a disturbing number of Tszyu-philes actively engaged in sports gambling. I like to check the lines after I make my pick to see whether I’m wildly out of step with the rest of the world. Oddsmakers have Tszyu running as high as 1/10, and I think this fight is much closer than that.

Gausha is coming up on 35 now, and pretty clearly established as a gatekeeper. That’s not meant as an insult… Not everyone gets to wear a belt in their career, and the gate Gausha keeps is a tough one to get through. He’s seldom been dropped and never been stopped, with his only two losses coming against very strong opposition. Even if Tszyu is a level above him, Gausha has proven his ability to frustrate superior foes and impose the style he needs on those fights, unappealing as it may look to the viewing audience.

Tszyu looks like he could really be something special. But we’ve seen plenty of rising stars suffer setbacks against gritty veteran types. I do think Tszyu can and likely will win, but a knockout seems unlikely given Gausha’s past durability and his history of smothering action against high level opponents. If you’re the paranoid type, think back to last month on Showtime, and a very quick and debatable stoppage with 30 seconds left that made Gary Antuanne Russell the first man ever to stop Viktor Postol! Maybe more of that is in store, who knows?

I believe Tszyu is talented enough to force his way past Gausha, but nowhere near as sure of it as the betting odds imply. If you’re someone who engages in the morally disreputable pastime of gambling on sports, it looks like there could be tremendous value in a small Gausha bet. For our competition purposes, though, give me Tszyu. Tszyu UD-12

I really want to see Tim Tszyu against a puncher. The man’s there to be hit, but his pressure, power, and durability have thus far let him break opponents down before they can hurt him. That looks to be the case once again; Gausha is a rock-solid technician with some nasty counters, as seen when he folded Jamontay Clark, but I don’t see him keeping Tszyu honest enough to shut down the Aussie’s vicious body attack and chopping rights.

He’s probably savvy enough to take Tszyu the distance, though, and 36 minutes is a lot of time with which to tag a guy who leaves his chin out. If he had just a bit more power, he could give Tszyu real problems. Alas, Tszyu’s aggression and eye-catching bombs will keep him in the judges’ good graces. Tszyu UD-12