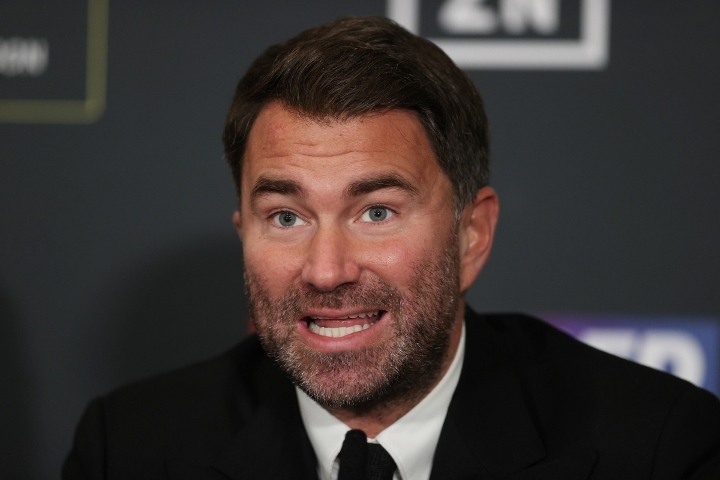 This weekend is “all or nothing” for Josh Warrington, who will have nowhere to go if he doesn’t regain his IBF featherweight title from Kiko Martinez at the First Direct Arena, Leeds, according to Eddie Hearn, who believes a stadium fight against Leigh Wood can happen if Warrington wins.

The promoter believes that Martinez, who claimed the title with an upset win over Kid Galahad, seems convinced he will hold on to the title against the former champion, who beat him in 2017 at the same venue.

“I think it is all or nothing for both of them,” Hearn said. “Both of them face retirement if they don’t win.

“I don’t know if Kiko knows something, but he is so convinced that he knocks Josh out. I guess people look at the (Mauricio) Lara fight and think ‘he’s done’.

“If Josh loses this fight, he will retire, no doubt. But if he wins, he could go and fight Leigh Wood, or Leo Santa Cruz (the WBA super champion) or (Emanuel) Navarrete (the WBO champion). All of a sudden there would be a load of opportunities opening up for him so it’s a massive fight.”

Victory for Warrington could set up a summer unification fight against Leigh Wood, who retained his WBA title by knocking out Michael Conlan earlier this month.

But with Wood insisting that he wants to box at the City Ground next (the home of Nottingham Forest), facing Warrington could be a problem is he insists on trying to box at Elland Road (the home ground of Leeds United).

And Hearn revealed that MTK, who manage both Wood and Conlan, are pushing for a rematch.

“Both guys are with MTK and there is a feeling that they would like to see the rematch,” Hearn said. “I haven’t had much time to catch up with Leigh and Ben (Davison, his trainer) but I feel their thinking is that it is done and they will look at the rematch further down the line.

“The Leo Santa Cruz fight will be ordered at some point (by the WBA) and you also have the winner of this weekend’s fight.”

One of the issues could be when Wood and Conlan are ready to box again. Conlan left the arena on a stretcher and was taken to hospital after being knocked unconscious and falling from the ring. But is was a desperately hard fight for Wood too, who was knocked down in the first round and took heavy punches throughout the fight.

At 33, though, Wood does not have time to wait.

“All Leigh Wood wants to do is fight at the City Ground,” Hearn said. “So, what are the fights? Kiko Martinez? Maybe. Josh Warrington? Absolutely, although he might want it at Elland Road, so it is a toss-up. Michael Conlan rematch? Absolutely. Santa Cruz? Yes. He has got options.

“The rematch might be the biggest fight. It was an epic fight, but he has got options now and it will be up to him and Ben and everyone to make the decision.

“Generally, you get the opportunity to do it (at a football ground) in July, which gives him another three or four weeks off. He has had two, is that enough?

“But if you want to do it, you can’t say wait until next year, this is his window. He needs to be ready for the back end of the summer if he is going to box at the City Ground.”