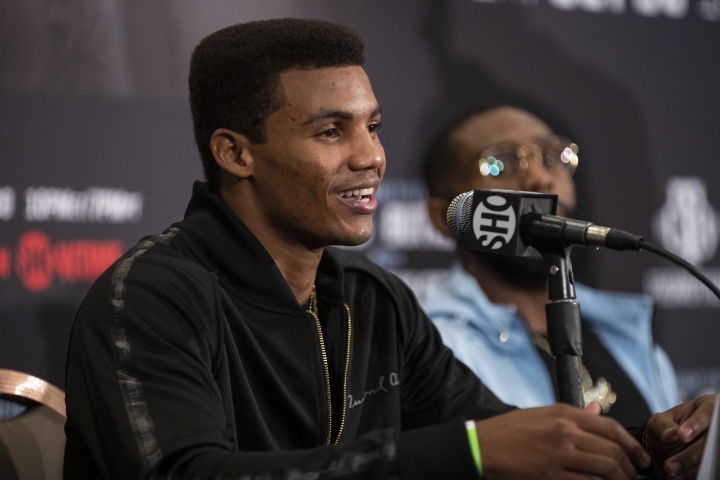 All the lightweight belts are tied up at the moment, but Michel Rivera still treats every fight like a championship run.

The red-hot contender is set for a scheduled ten-round showdown with fellow unbeaten lightweight Joseph Adorno (14-0-2, 12KOs), with the promise of the winner going on to challenge for the division’s top prize. It’s a tale that Rivera has heard before, specifically after his off-the-canvas, eighth-round knockout of Spain’s Jon Fernandez in their billed title eliminator last July 3 in Carson, California.

This time around, the focus is less on what lies ahead than on what is immediately in his way.

“I know this fight is a big step for me,” Rivera told BoxingScene.com. “After this fight, I can get a title shot. I have to beat this guy first. He has potential, this guy is undefeated too. Everybody is excited for this fight. I’m ready for anything. I don’t know what will happen. I’m pretty sure that I will win.

Rivera (22-0, 14KOs) would love nothing more than to go straight to a fight with lineal/WBA/IBF/WBO champion George Kambosos (20-0, 10KOS) or the winner of secondary WBA lightweight titlist Gervonta ‘Tank’ Davis (26-0, 24KOs) and mandatory challenger Rolando Romero (14-0, 12KOs). Either route would still require at least a one-fight wait, a scenario that doesn’t interest the Miami-based Dominican contender.

The hope was to have traveled either option after his win over Fernandez. Sweeping changes in the WBA’s title policy stalled that progress, with Rivera now taking his second stay busy fight while building toward his first career title fight. The belief that he’s ready to challenge for the title leaves Rivera confident of prevailing over Adorno in their Showtime-televised battle this weekend from The Armory in Minneapolis.

“I’m ready for anyone at lightweight. I was ready the same day that I beat Jon Fernandez,” insists Rivera.

The WBA had changes, so I had to wait. I don’t know how much more I have to do. They say I have to win an eliminator. But before this, they give me another eliminator.