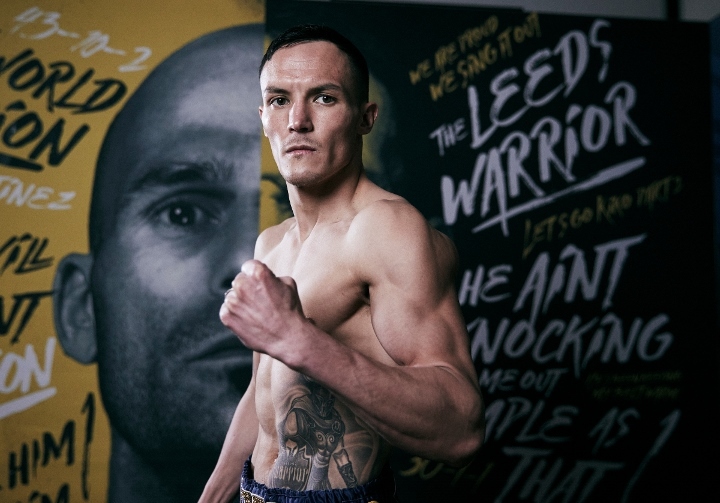 It wasn’t that long ago that there was beginning to be an argument that Leeds’ 31-year old Josh Warrington (30-1-1, 7 KO) might be the emerging leader at featherweight.

After winning the IBF belt in 2018 with a spirited decision over Lee Selby, Warrington managed three defenses including an impressive outing against former titlist Carl Frampton and a close one against future titlist Kid Galahad.

While there was still more resume for then-WBC titlist Gary Russell and still-reigning WBA titlist Leo Santa Cruz, their absence from the class at least left room to argue. Then COVID hit and Warrington went from steady appearances to a fourteen-month absence from October 2019 to February 2021. Along the way, Warrington vacated his belt with an eye toward facing then-WBA sub-titlist Can Xu.

All Warrington had to do was handle a fighter most had never heard of.

Any debate that was emerging about where Warrington belonged in the featherweight pecking order was silenced.

Mexico’s unheralded Mauricio Lara battered Warrington, dropping him twice and stopping Warrington in nine. An immediate rematch in September ended in a technical draw after Lara suffered a cut from a clash of heads. It should have been enough to get Lara into position for a title shot.

Eventually, it probably will.

For now, the bigger name and local appeal of Warrington means a homecoming for a man looking to regain the belt he never lost in the ring. Saturday (DAZN, 3 PM EST), Warrington will challenge 36-year old unlikely IBF titlist Kiko Martinez (43-10-2, 30 KO).

Spain’s Martinez wasn’t supposed to be here. It had been years since Martinez, also a former IBF Jr. featherweight titlist, beat a serious contender when he challenged Kid Galahad for his featherweight strap last year. Martinez was 3-2 in his previous five starts including a wipeout in five challenging Russell and a decision loss to Zelfa Barrett.

Once the leather flew, the only thing that mattered was Martinez landed better. Galahad was down in the fifth and out in the sixth. Does the older man have another surprise?

It will be familiar space for both men this weekend. They’ve seen each other before. In 2017, Warrington won a hotly debated majority decision over Martinez in what was in many ways a breakthrough moment. Martinez was Warrington’s first win over someone who had held a title and two fights later Warrington was in with Selby.

It adds an extra dimension to what is a rest moment for Warrington. Had the first Martinez fight gone the other way, Warrington’s career likely takes a different path. Instead, his path brings him back almost full circle. Warrington needed to beat Martinez to get to another level.

Now Warrington needs to beat Martinez to get back to where he was.

Martinez will have something to say. He showed against Galahad he can still compete with the right opponent. The motivation to correct what Martinez sees as a wrong in the first Warrington fight, the motivation to just keep going, will add drama to the weekend. This has the look of a fight without a clear favorite and that’s never a bad thing.

With a win this weekend, Warrington can put the disaster of inactivity and Mauricio Lara behind him. Warrington won’t have time to rest on laurels. He could find himself right back with Lara, who is currently within punching distance of a mandatory crack at the IBF belt. The current IBF ratings have Lara ranked just behind Luis Lopez-Vargas.

But he’ll be back to where he was and that’s a lot better position than being a former champion going on three years since his last win.

Tim Tzsyu’s US debut this weekend against Terrell Guasha is a chance to make a statement to the world about his chances at Jr. middleweight. It’s also a chance to let everyone who watched Kostya Tszyu in the 1990s and early 2000s that they’re not getting any younger…Erik Morales-Orlando Salido might just be an exhibition but once the leather flies do those two know how to do anything but battle? Between the two of them, there is a day’s worth of fight of the year winners and candidates to watch from the last 25 years and change. The exhibition circuit isn’t always worth checking out. This one might be…Sunny Edwards-Julio Cesar Martinez chatter continues. That’s good for flyweight but it would be even better if the winner said the name Junto Nakatani whenever their business is done…So are we going to get George Kambosos-Devin Haney? That’s a hell of a fight if it gets finalized.