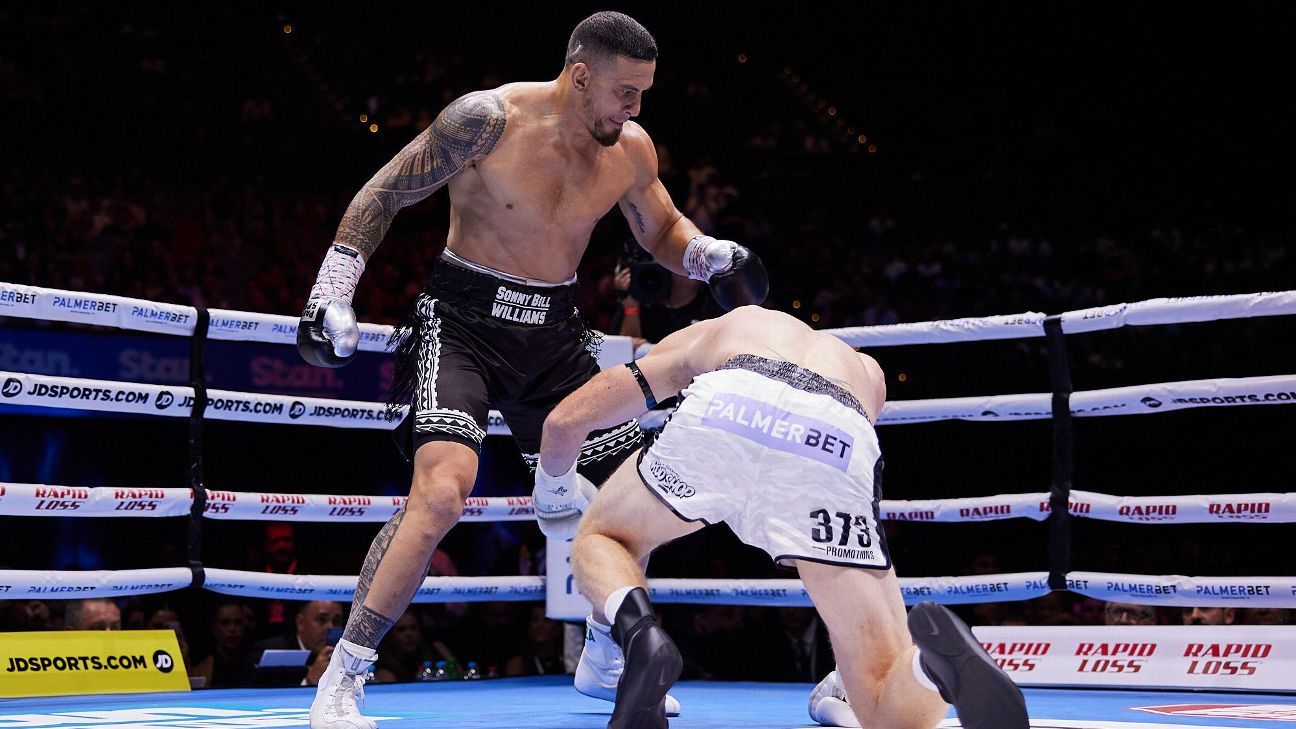 Sonny Bill Williams has blasted Barry Hall out inside two minutes and says Paul Gallen could be his next opponent.

Williams jolted the Sydney Swans premiership winner in the first half minute with some crisp accurate shots.

Hall was down after just 47 seconds, though referee Les Fear said he didn’t see a punch.

It looked like Hall had been hit with a left hook and he appeared unsteady after standing up.

Within 40 seconds, the 45-year-old returned to the canvas after taking a couple of big shots,

A ruthless Williams ended the contest a few second later, after he landed a big right hand that felled Hall, prompting Fear to end the one-sided contest after one minute 55 seconds.

The 36-year-old Williams, who weighed in 11 kilos heavier than Hall, improved his professional record to 9-0 while Hall dropped to 0-1-1.

“There’s a reason why only one per cent of people do this type of stuff. So much respect for Barry and his team for coming in and doing this,” Williams said.

“Because I was nervous before the fight.”

Asked about his next fight, Williams referred to the long-talked about match-up against fellow former NRL great Gallen.

“There’s talk of Gallen, so maybe Gallen,” SBW said to rousing cheers from the crowd.

In an interview with the Nine Network on Thursday morning, Williams said the ball was in Gallen’s court.

“Maybe, maybe, it would be a great fight to make,” he told Nine. “I said to him afterwards, I said ‘let’s sit down, let’s talk’. But then I also said to him I’m a well-rounded individual, I don’t need fighting, I just love it.

“So we’ll see what happens. Maybe if he jumps up and down and says ‘I want this, I want that’; well the talks might go on for a little bit longer.”

Fleming was knocked down by a right hand in the second round but recovered to jolt his opponent with a left in the same round.

Both men suffered a cut near an eye but pounded each other throughout the fight.

Another winner on the undercard was professional debutant Rahim Mundine, the third generation of the outstanding Australian boxing family.

Mundine displayed some of the traits of his father, utilising slick feints and sometimes carrying his hands low and looked relaxed and composed and fired off some slick flurries of blows.