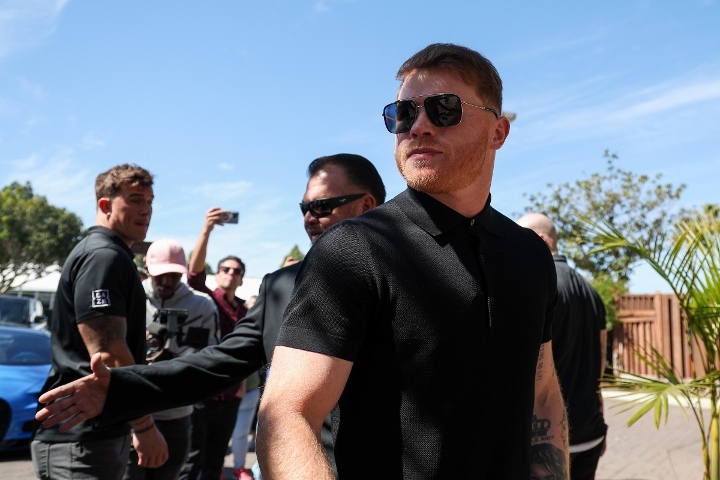 Eddie Hearn is working to ensure that Canelo Alvarez’s potential third fight this year will involve one of his fighters.

The promoter of Matchroom Boxing said Alvarez had requested that he look into a potential opponent for a fight date in December. Alvarez is currently signed to a two-fight deal with Hearn and DAZN, Hearn’s streaming partner, that will see the Mexican superstar first take on Russian light heavyweight Dmitry Bivol for Bivol’s 175-pound WBA title on May 7 in Las Vegas. Should Alvarez, who is the undisputed champion at 168, come out victorious, he will then be scheduled to face Gennadiy Golovkin in a trilogy bout in September.

Hearn said Alvarez (57-1-2, 39 KOs) is interested in extending the deal to a third fight at the end of the year to take place preferably in Guadalajara, Alvarez’s hometown in Mexico, or in London, where Hearn is based. The latter option is particularly appealing to Hearn, since he has a couple of British fighters in his promotional stable that could make for a compelling fight. Alvarez has spoken previously about wanting to fight on the international scene, and an Alvarez bout in a fistic-crazed nation like England would obviously generate plenty of attention – and money.

“Canelo Alvarez and [head trainer and manager] Eddy Reynoso both want to fight in December,” Hearn told talkSport. They’ve both asked me to look at options for Guadalajara and London.

Hearn mentioned John Ryder, the rugged 168-pounder from London, as one possibility. Ryder (31-5, 17 KOs) is coming off a high-profile win, a split decision over former middleweight titlist Daniel Jacobs last month in London. The other option for Alvarez is to face the winner of the upcoming light heavyweight tilt between Londoners Joshua Buatsi (15-0, 13 KOs) and Craig Richards (17-2-1, 10 KOs).

Hearn believes that the mandatory status conferred on Ryder, at 168, and the fact that Buatsi-Richards is categorized as a WBA light heavyweight eliminator, should make them all the more appealing as options for Alvarez.

“We’ve got John Ryder, who’s mandatory at 168 pounds,” Hearn said. “And you’ve got the winner of this fight (Buatsi-Richards). Both guys [are] great options, great opponents for Canelo Alvarez in December.

“There’s a lot that’s got to go right for everybody but if Canelo Alverez wants to fight in London in December, which we’re told that he would like to explore that option, the winner of this fight (Buatsi-Richards) is a clear frontrunner, because this is the official eliminator for the winner of Canelo against Bivol. So massive opportunity for both in this fight.”

Another name on Alvarez’s shortlist for December is the cruiserweight titlist Ilunga Makabu of South Africa. Hearn had previously mentioned that Alvarez’s third fight could potentially involve Makabu (29-2, 25 KOs) in Guadalajara. Alvarez and Reynosos were seemingly fixated on moving up to cruiserweight and facing Makabu shortly after Alvarez’s knockout win over Caleb Plant last November. A Makabu fight, if and whenever it happens, would be less enticing for Hearn, as he has no concrete ties with the Congolese-born fighter; Makabu is promoted by Don King.

“I would certainly love to bring Canelo Alvarez to the UK,” Hearn said.