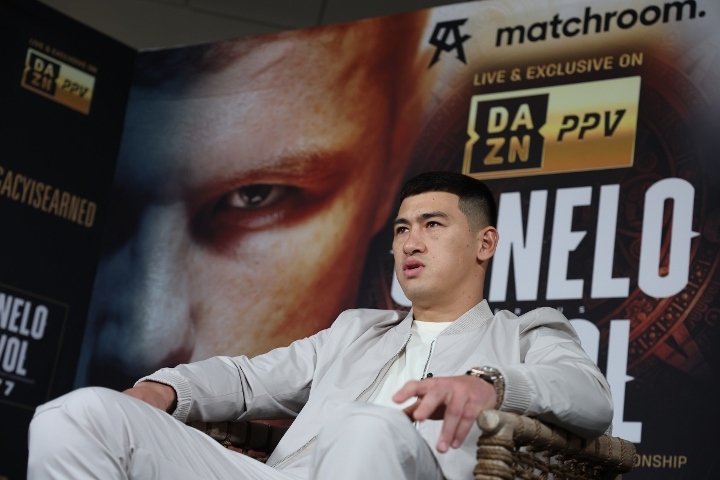 SAN DIEGO – Dmitry Bivol isn’t worried about winning the press conference or any other pre-fight aspect of his upcoming showdown with Saul ‘Canelo’ Alvarez.

The only thing of concern to the reigning WBA light heavyweight titlist is the fight itself.

“As far as what happens at press conferences, none of it affects what you do in the ring,” Bivol told BoxingScene.com and other reporters of where all of his concentration lies ahead of his upcoming title defense. “I’m just focused on being prepared mentally and physically. The [public relations] part of it and winning over the press does not win you fights.”

Simply put, Bivol (19-0, 11KOs) is more interested in trading punches on fight need than trading words leading into their May 7 DAZN Pay-Per-View headliner from T-Mobile Arena in Las Vegas. It’s a vastly different approach than was the case for Alvarez’s last two fights, scoring stoppage wins over then-unbeaten Billy Joe Saunders and Caleb Plant on the road to undisputed super middleweight championship status.

Saunders and Plant both had plenty to say leading into the respective fights with Guadalaraja’s Alvarez (57-1-2, 39KOs). Plant (21-1, 12KOs) particularly made a point to focus on Alvarez’s past drug testing scandal and also managed to get into a brief skirmish during the initial press conference last September to formally announce their November 6 Showtime PPV headliner.

None of what Saunders or Plant had to say during the buildup mattered once the opening bell sounded. Alvarez beat both into submission and collected their belts, coming on the heels of his 12-round virtual shutout of then-unbeaten WBA super middleweight titlist Callum Smith in December 2020.

Bivol has never bothered himself with the trash-talking part of the sport—whether in English or in Russian, his first language. The no-nonsense, long-reigning light heavyweight titlist from Saint Petersburg, Russia by way of Kyrgyzstan is merely focused on just one thing—beating the sport’s best pound-for-pound fighter. Hard work and preparation is what will get him there, not talking himself into a win.

“It’s important to be mentally strong in the ring. The preparation, the repetitions in training are important as well. But if you walk in the ring thinking you can’t win, that takes about 40% of the possibility of winning the fight even if you are physically at your best.”