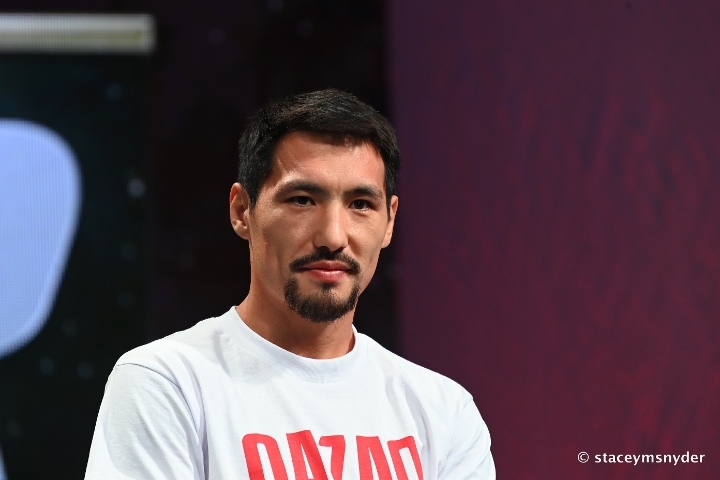 Another ordered fight, another set of stalled talks for Janibek Alimkhanuly.

A purse bid hearing has been called to determine promotional rights for the WBO-ordered interim middleweight title fight between Alimkhanuly and Danny Dignum. The ten-day negotiation period failed to produce a deal between the unbeaten contenders, prompting the WBO to schedule a purse bid for March 28 at its headquarters in San Juan, Puerto Rico.

The minimum accepted bid is $200,000 for the fight, per a letter sent to all WBO-registered promoters on Tuesday.

In the event that Andrade wins and remains at super middleweight, the Alimkhanuly-Dignum winner will be upgraded to full WBO middleweight titlist. Andrade is also at risk of being stripped of his WBO middleweight belt should he lose to Parker.

Tijuana’s Munguia was ordered to fight Alimkhanuly after previously assigned contender Esquiva Falcao bowed out of the fight. Alimkhanuly-Falcao was ordered in late January, only after Andrade was granted permission to pursue an interim super middleweight title fight after two months of stalling on plans to next honor his ordered mandatory title defense versus Alimkhanuly.

Dignum enters the equation on the heels of a sixth-round knockout of Grant Dennis on February 11 the famed York Hall in Bethnal Green, London. The 29-year-old southpaw signed with upstart promotional company Probellum soon thereafter, while still represented by managerial conglomerate MTK Global who was contacted by the WBO to enter negotiations with Alimkhanuly’s promoter Top Rank and manager Egis Klimas.

Alimkhanuly emerged as the highest ranked available challenger thanks to back-to-back eighth-round stoppages of former secondary WBA titlists Rob Brant and Hassan N’Dam N’Jikam. Alimkhanuly tore through Brant in their one-sided affair last June in Las Vegas, where he returned to take out N’Dam on the undercard of Terence Crawford’s WBO welterweight-defending stoppage win over Shawn Porter last November at Michelob ULTRA Arena.

The winning promoter from Monday’s purse bid is required to submit a 20% deposit of the total bid within two business days, with final contracts to be filed with the WBO by no later than April 2. The WBO interim middleweight title fight must take place within 45-90 days of the purse bid, no later than June 26.