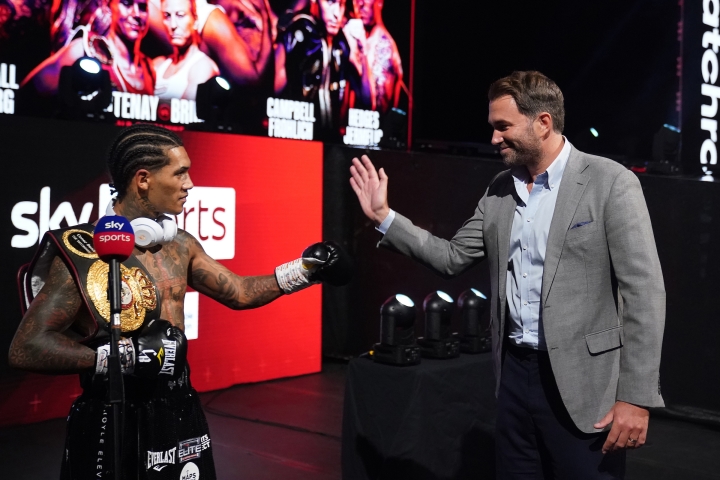 Eddie Hearn believes there is a double standard when it comes to the blowback he has received regarding the latest choice of opponent for rising welterweight Conor Benn.

Benn, the son of famed two-division world champion Nigel Benn, is slated to take on tough but shopworn veteran Chris van Heerden of South Africa on April 16 at Manchester Arena in Manchester.

The selection of van Heerden for Benn, thought to be one of the leading lights of the next generation of British boxing, was met with a collective groan by the boxing world, which was led to believe that a bigger name was in the works. Hearn, the head of Matchroom Boxing, had mentioned possible opponents such as Adrien Broner and Maurice Hooker.

Hearn thinks that the criticism Benn (20-0, 13 KO) has received for fighting van Heerden (28-2-1, 12 KOs) is disingenuous, considering that he does not recall that Jaron ‘Boots’ Ennis, the southpaw from Philadelphia who is regarded as one of the most talented, young welterweights in the sport, experienced a similar degree of censure from the public; Ennis (28-0, 26 KOs) was van Heerden’s last fight, which was declared a no decision in the first round after van Heerden suffered a cut from an accidental headbutt.

“Let’s get one thing straight: [It was] 18 months ago, yes, but Van Heerden’s last fight was against Boots Ennis headlining on Showtime,” Hearn told Seconds Out. “And 18 months ago it was okay for Boots Ennis but it’s not okay for Conor Benn?”

Hearn, to be fair, had a deal consummated for Hooker to fight Benn, but Hooker, the former junior welterweight titlist from Dallas, Texas, had to back out after sustaining an injury. Hence van Heerden.

“Hooker accepted the fight. We did the deal with Hooker and then he pulled out a week later with a back injury,” Hearn said. “Van Heerden’s a good fight for Conor Benn. He’s a southpaw. He’s (Benn) not fought a competitive southpaw his whole career.”

“I think this is a real fight,” Hearn continued. “Van Heerden will come to fight. He’s extremely competitive. He’s strong.

“But I think you’re going to see why I believe one of the biggest stars in British boxing is Conor Benn.”