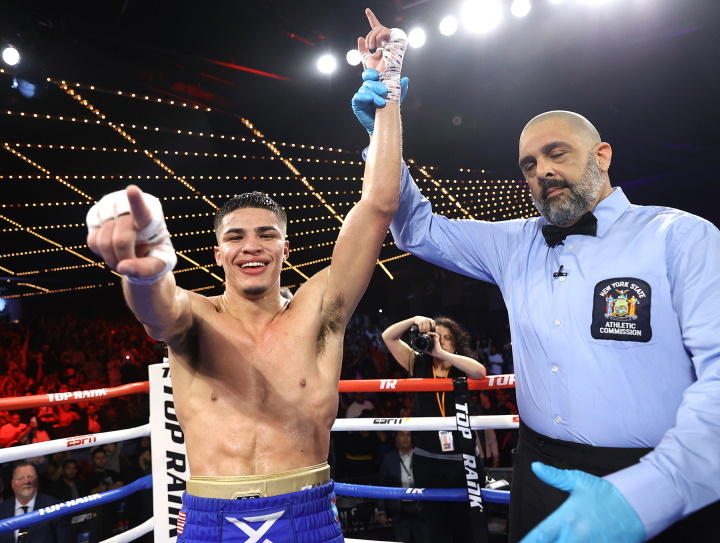 At the sold out Hulu Theater at Madison Square Garden, before a crowd of 5,158 fans, unbeaten Xander Zayas was dominant in the junior middleweight co-feature on ESPN, shutting out New Orleans-based veteran Quincy LaVallais over eight rounds (80-72 2x and 80-71).

Zayas, the 19-year-old phenom from San Juan, Puerto Rico, excelled in his first scheduled eight-rounder, applying the pressure early and never letting up.

Zayas (13-0, 9 KOs) nearly scored the stoppage in round two, as he had LaVallais (12-3-1, 7 KOs) pinned against the ropes for the whole round. He landed 54 punches in that stanza, but LaVallais’ granite chin blunted Zayas’ power. By the fifth, LaVallais was marching forward, if not banking rounds.

Zayas kept the barrage going in the later rounds, and LaVallais received a moral victory of sorts in surviving the distance. Zayas outlanded LaVallais at a nearly 4-1 clip, 262-66.

The rising star will now be positioned to return to the ring on June 11, as part of Top Rank’s big card that will also feature undefeated super middleweight Edgar Berlanga.

Zayas said, “I need this type of experience. Eight rounds against a tough opponent will only help me as I move forward in my career.

“The plan is to come back June 11 at The Garden on Puerto Rican Parade Weekend. That’s a special weekend for Puerto Ricans, and I am proud to represent my people.”

Luis applied his typical pressure, but that wasn’t enough to upset the apple cart against the rising Puerto Rican star. Bauza used his southpaw jab and quick-trigger combinations to blunt the Luis attack.