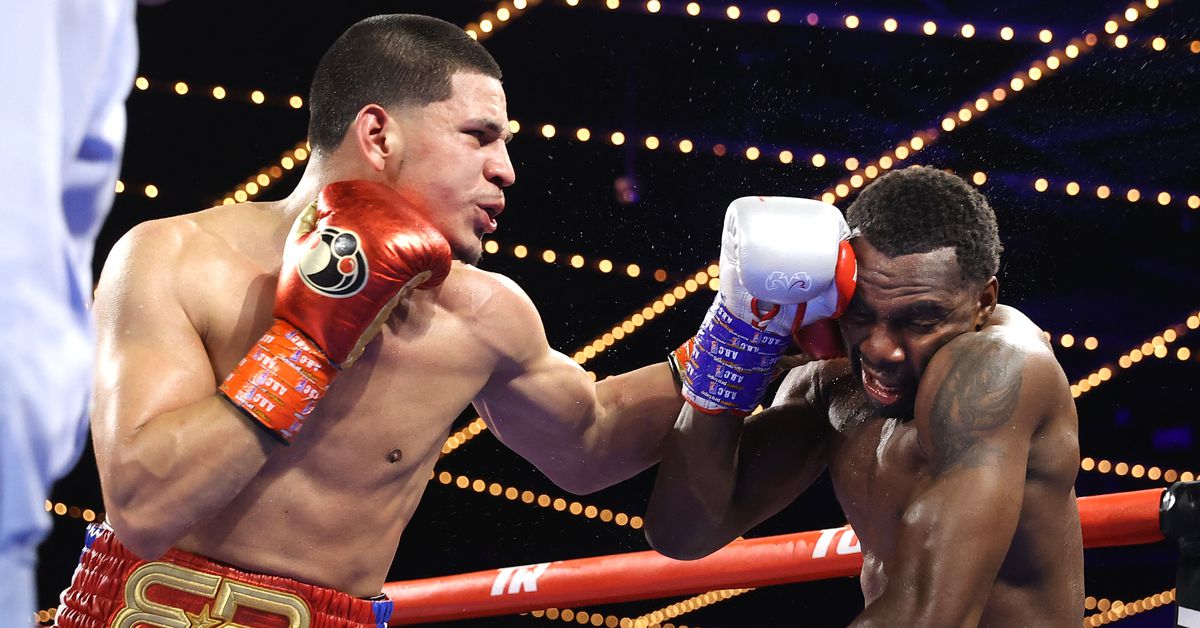 Edgar Berlanga won a clean and clear decision tonight over Steve Rolls in the basement at Madison Square Garden. But he left the ring with an even cloudier and more questionable future than when the night began.

Fair or not, Berlanga (19-0, 16 KO)was facing some questions and doubters after two straight decision victories, the first against Demond Nicholson last April and the other against Marcelo Coceres in October, ended his 16 fight streak of first round knockouts. Berlanga found himself on the canvas in the ninth round of that Coceres fight, and on the surgical table after it to repair a badly torn biceps.

In what could have been a get-well fight tonight, things started exceptionally slowly. Berlanga didn’t do much, seldom pressing or initiating major exchanges with Rolls (21-2, 12 KO) despite Rolls looking skittish and spending most of the early rounds in some form of retreat. But, he did enough to win rounds, in that he did something.

The fight finally shifted out of neutral in the middle rounds. Rolls started throwing and moving in ways that Berlanga struggled to handle. Berlanga, who had difficulty generating offense against a shelled-up Rolls, had even less success landing worthwhile punches against an increasingly active and confident Rolls.

Berlanga finally adjusted to Rolls’s activity in the ninth round, landing a few power shots that slowed Rolls down enough to let Berlanga take the last two rounds and secure the victory. That’s how I had it in scoring the fight 97-93 for Berlanga, identical to two of the official scores, with a third judge seeing it 96-94.

A viewer who only saw Rolls flinching and moving in reverse through the first half may have thought Berlanga had a gun in his waistband. One who tuned in midway might have assumed Steve Rolls was the A-side of the fight.

Rolls never really seemed like a threat to stop Berlanga or win a decision, but he looked like he solved Berlanga and made his life difficult for much of the night. Not bad for someone arguably best known as the guy people mention when they want to criticize Gennadiy Golovkin’s activity and matchmaking since his last fight against Canelo Alvarez.

You can tell a lot about how things are going for the house fighter by the highlights made available on social media. Tonight, there were none posted by Top Rank or ESPN.

Andre Ward, Tim Bradley, and even Mark Kriegel all gave candid and valid criticism of Berlanga’s performance throughout the night. None of it was unfair, but the volume and variety of it was shocking, given how ESPN in particular usually discuss their headliners in the adoring tone of a mother describing her child’s graduation from medical school.

I don’t know what comes next for Berlanga. He put a big spotlight on himself with the knockout streak. All the eyeballs it brought him have seen three straight fights that hint at a lower and lower potential ceiling. He’s not a bad boxer, and he hasn’t been “exposed,” necessarily. But he’s a young guy who could really use another star performance to get his reputation back on track in whatever fight comes next.

Xander Zayas put on a clinic in the co-feature, clearly and definitively controlling every single round against Quincy LaVallais, who had enough heart and defensive skill to avoid a finishing punch.

The most dominant round for Zayas (13-0, 9 KO) was the second. He spent much of that round pummeling LaVallais on the ropes and almost knocking him through. LaVallais spent most of the round forced to cover and twist in an effort to avoid or stifle at least a dozen potential knockout punches from Zayas that couldn’t land cleanly enough to do the job.

Zayas slowed the pace a bit in the third, landing heavy counters whenever LaVallais tried to initiate an attack. The impact of those counters left LaVallais hesitant to throw, leading Tim Bradley to compare him to “a guy working at the car wash who doesn’t like to get wet.”

It was a very funny line, but perhaps a bit unfair. I said in our live coverage that a lesser defensive fighter would have found themselves unconscious or worse within the first 5 minutes of action, and a paycheck collector would have just found a place to fall down even sooner than that.

A wilder, less disciplined fighter than Zayas might have chased the stoppage and exhausted themselves. LaVallais wasn’t so lucky, as Zayas fought methodically without surrendering control of space and distance.

Zayas is an exceptionally talented fighter with real potential for greatness. He’s still a teenager, fighting with the discipline and maturity of a seasoned professional. LaVallais denied him a highlight reel knockout. But the consolation prize was a bell-to-bell domination that showed us much more about how Zayas can adjust when raw power and talent aren’t enough to finish the show early.

Two judges had it 80-72 for Zayas, with the third scoring it 80-71. I agreed with the wider card, scoring the second round 10-8 for Zayas despite the lack of a knockdown.

The opener between John Bauza and Tony Luis did little to lure or retain an audience for Top Rank’s promising young stars. Things started ugly, with a lot of clutching, dragging, and throwing. In the second round, the slop got so thick that both men received a simultaneous referee warning for rabbit punching.

Bauza (17-0, 7 KO) did the best work early, then engine braked to the final bell. Luis (29-5, 10 KO) couldn’t get much going in the first half, but started landing nice body shots and split the fight in halves on my unofficial scorecard. Bauza wouldn’t, couldn’t, or just plain didn’t try to get back to the early approach that allowed him to sweep the first half of the fight, fighting in retreat and giving Luis the space and opportunity to land cleaner punches in the second half.

The crowd booed the end of the fight, and Tim Bradley responded to the official decision by saying “That was terrible.” They were all correct.