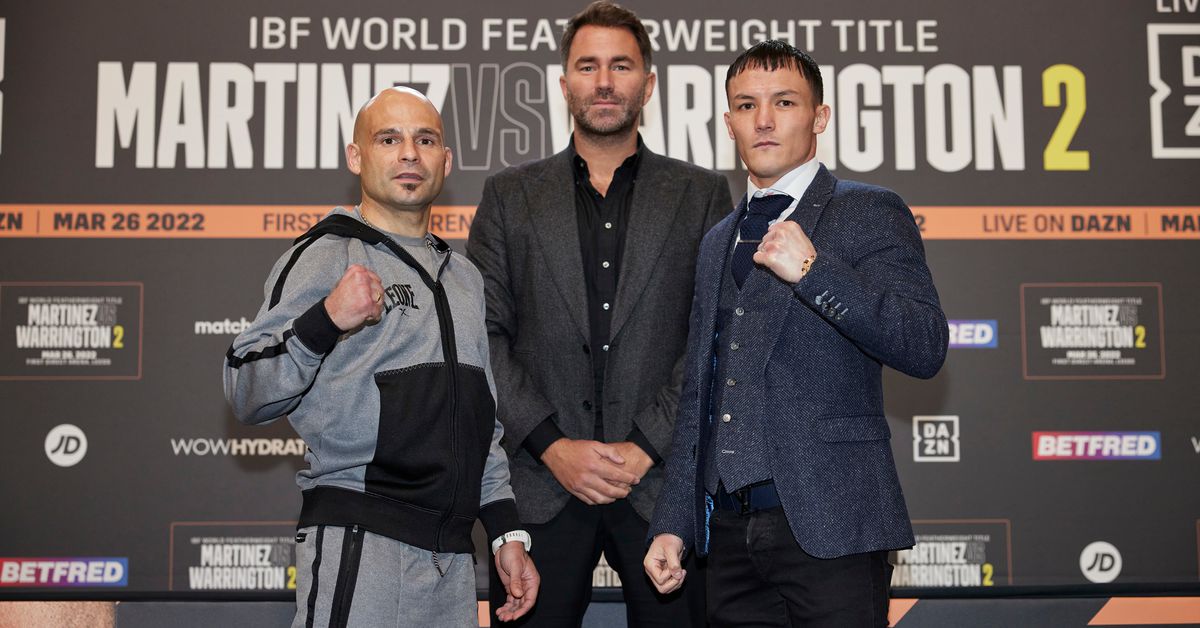 DAZN and Social Media, 9:00 am ET, Martinez vs Warrington 2 weigh-in.

Fubo Sports Network, 2:00 pm ET, Lewis Ritson vs Dejan Zlaticanin, Troy Williamson vs Mason Cartwright. I’m guessing the Fubo thing won’t just be one week, anyway, and that Probellum shows will keep being on there.

DAZN, 3:00 pm ET, Kiko Martinez vs Josh Warrington 2. Things have oddly worked out pretty well for Warrington, who vacated his IBF featherweight title instead of rematching Kid Galahad, and then got clobbered by Mauricio Lara. Now, a year later, he had the rematch with Lara that ended early with no decision, and he’s back in a title fight against a guy he beat five years ago. Martinez is a wonderful story and an extremely likable fighter, I think we all enjoy Kiko, but he should be the underdog here. He beat Galahad because he landed a game-changer shot, Galahad was in full and complete control of that fight before then. But maybe that’s the spark for Kiko, too, and he’s got another few fights like that in him. You never know until you find out. I think it’s an intriguing rematch. Maxi Hughes looks to continue his own hot streak against Ryan Walsh, and Maria Cecilia Roman defends the IBF bantamweight title against Ebanie Bridges. Bad Left Hook will have live coverage.

SHO, 9:00 pm ET, Tim Tszyu vs Terrell Gausha. Tszyu’s U.S. debut, and not an easy fight, Gausha is no joke. If Tszyu shines again here, we may really have something in the second generation standout. Three-fight card, also featuring Michel Rivera vs Joseph Adorno and Elvis Rodriguez vs Juan Jose Velasco. The show’s in Minneapolis, which has become a nice second-tier hub for PBC with really good crowds. Bad Left Hook will have live coverage.

ESPN+ and ESPN, 10:00 pm ET, Miguel Berchelt vs Jeremiah Nakathila. Remember Nakathila? He almost punched Shakur Stevenson a couple times. Anyway, this should be a better gauge of how good he is or isn’t, or how exciting he can or won’t be. Berchelt’s a hell of a fighter, but he doesn’t have the style of Stevenson, who can dominate without taking chances. It’s also Berchelt’s move up to 135 after a disastrous result following a real struggle to make weight against Oscar Valdez about a year ago. Bad Left Hook will have live coverage.