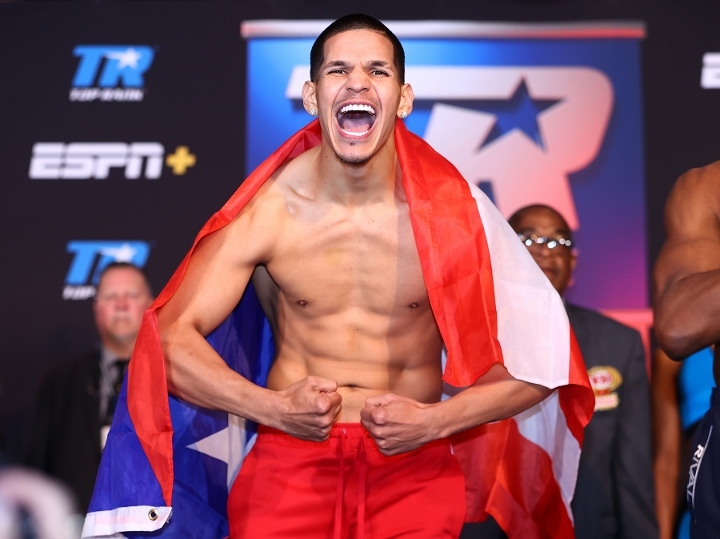 NEW YORK – Edgar Berlanga was taken the distance in a third straight fight Saturday night, but the super middleweight managed to remain unbeaten.

Brooklyn’s Berlanga did enough to defeat a skillful, tough Steve Rolls by unanimous decision in their 10-round main event. Judges Tom Carusone (97-93) and Mark Consentino (97-93) scored seven rounds apiece for Berlanga, who won six rounds according to Frank Lombardi (96-94) in the main event of an eight-bout card before a capacity crowd of 5,158 at Madison Square Garden’s Hulu Theater.

Berlanga didn’t throw many punches in combination, though, and wasn’t overly impressive in a fight ESPN televised. His performance, according to Berlanga, was partially attributable to the 37-year-old Rolls’ reluctance to engage.

“That was like a ‘C’ performance,” Berlanga told BoxingScene.com. “I couldn’t get my punches off the way I wanted to. The guy was scared. Every time I opened up, it was like he was moving – scared tactics, you know? If you know boxing, you know that fighting a scared fighter is the hardest [fight]. I thought he was gonna stay there and fight me, but he ran the whole fight.”

Though he didn’t deliver the knockout his loud, proud Puerto Rican fans wanted, the 24-year-old Berlanga (19-0, 16 KOs) bounced back from a subpar performance in his previous fight – a 10-round, unanimous-decision defeat of Argentina’s Marcelo Coceres on October 9 in Las Vegas. Berlanga suffered a torn left biceps in the third round of that bout, but he battled through a significant injury, got up from a flash knockdown late in the ninth round and won by the same score, 96-93, according to all three judges.

Berlanga underwent surgery to repair his biceps and stayed out of the gym for almost three months thereafter.

Before Berlanga beat him, Toronto’s Rolls (21-2, 12 KOs) had won both of his bouts by knockout since IBF middleweight champion Gennadiy Golovkin knocked him out in the fourth round of their June 2019 fight at Madison Square Garden.

Berlanga sustained a cut over his left eye in the second round Saturday night, but he told BoxingScene.com it won’t prevent him from headlining another card June 11 at Hulu Theater. His opponent for that bout, which ESPN also will televise, hasn’t been determined.

Late in their fight Saturday night, Berlanga tried to knock out the shorter Rolls, who probably is better suited to fight at middleweight, as soon as the 10th round started.

Rolls fended off Berlanga as best he could with his jab, held and moved away from his dangerous opponent throughout the second half of the 10th and final round.

Berlanga snapped back Rolls’ head with a stiff jab that connected just before the midway mark of the 10th round.

Earlier in the 10th round, Berlanga tried his best to land a right hand that could change the fight.

A thudding right hand by Berlanga landed with just under 1:40 on the clock in the ninth round. Rolls held briefly to withstand that trouble.

Berlanga blasted him with a right to the body with just over a minute to go in the ninth round. Berlanga connected with another hard right hand

Rolls went at Berlanga’s body early in the fifth round to try to slow down his heavier-handed opponent. Berlanga caught Rolls with a right hand a little less than a minute into the fifth round, which caused Rolls to hold him.

A stiff jab by Berlanga knocked Rolls backward with 1:15 to go in the fifth round. Rolls fought exclusively off his back foot again throughout the fifth round and didn’t land many punches.

Berlanga landed two hard jabs within a 10-second span in the middle minute of the third round. Rolls’ right hand landed with just over 15 seconds remaining in the third round, but Berlanga took it well.

Rolls slipped to the canvas with just under 1:15 to go in the second round. Rolls’ left elbow caused a cut around Berlanga’s left eye before Rolls went to the canvas.

With just over 20 seconds on the clock in the second round, Berlanga landed a hard right hand up top that made Rolls hold him.

Berlanga held his guard high as he pressed forward for most of the first round. Rolls tried to keep Berlanga at a distance by flicking his jab, but Berlanga landed a flush right hand to the side of Rolls’ head several seconds before the first round ended.