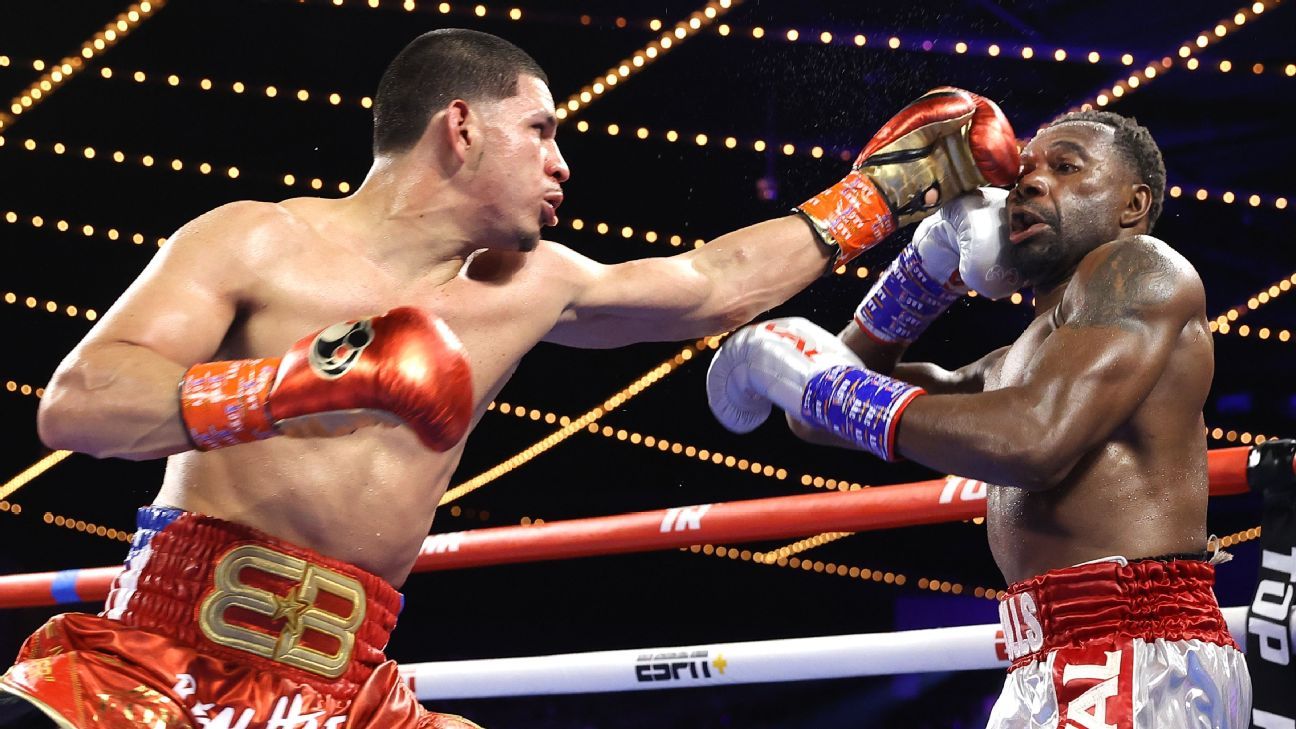 Edgar Berlanga steadily created buzz during the first 16 fights of his career, all of which ended via first-round knockout victory.

Following Saturday’s win over Steve Rolls before a sold-out crowd at New York’s Hulu Theater at Madison Square Garden — Berlanga’s third consecutive decision win — much of the hype surrounding the 24-year-old seems to be fading.

Yes, Berlanga (19-0, 16 KOs) scored a victory over his best opposition yet, a unanimous decision via scores of 97-93, 96-94 and 96-94. But the menacing power wasn’t on display, and the performance raised more questions than answers.

“You could tell that he was fighting scared,” Berlanga said. “Every time I reach in or throw something, he’d pull back and was running the whole fight.

“I was looking for the big shot. My corner was telling me to use the jab. I’m just happy we got the victory and I’m moving forward.”

With just 44 rounds boxed in the pros, Berlanga remains a work in progress. His star power, though, is clear. In his first ESPN main event, Berlanga, a Brooklyn native, sold 5,158 tickets in a sell out at the small room inside MSG.

As Berlanga progresses to bigger fights, more will be asked of him inside the ring. Against Rolls, a 37-year-old whose lone previous loss came via fourth-round knockout against Gennaidy Golovkin, Berlanga encountered some rough moments.

Rolls (21-2, 12 KOs) presented a moving target, forcing Berlanga to attempt to cut off the ring. Instead, he seemed to plod as he followed the Canadian. Rolls was rarely in range to land effective punches, but an accidental elbow caused a cut over Berlanga’s left eye in Round 2.

Berlanga continued to push forward, but he couldn’t find the mark. Still, he landed the bigger shots and seemed to win the first half of the fight.

Rolls started to attack effectively in Round 6 as he winged power shots off the jab. Suddenly, he was very much in the fight. He threw 133 more punches than Berlanga but landed just three more shots, 123-120.

Berlanga never threatened to score the knockout, and Saturday’s fight follows the worst performance of his career, a unanimous-decision win over Marcelo Esteban Coceres in October. In that outing, Berlanga suffered a torn left biceps and subsequently underwent surgery. More concerning, he was floored by Coceres in Round 9, the first knockdown of his career.

There was no such danger for Berlanga on Saturday against another veteran opponent, but it’s apparent that as his competition stiffens, Berlanga will need to develop along with it.

“Edgar Berlanga fought a tough, defensive fighter, and he got some valuable rounds in tonight,” said Berlanga’s promoter, Top Rank chairman Bob Arum. “As you saw from the sold-out crowd, the kid is a star. There are many more big nights to come.”

The next big night is expected to be June 11, when Berlanga once again headlines on ESPN at Hulu Theater at MSG. And once again, there will plenty of doubts to erase.

Zayas shines in 8-round rout

He remained undefeated with a unanimous-decision victory over Quincy LaVallais via scores of 80-71, 80-72 and 80-71.

Zayas (13-0, 9 KOs) had LaVallais (12-3-1, 7 KOs) in serious trouble in Round 2 as he battered him along the ropes, but the 28-year-old from Louisiana native never wilted. Still, Zayas showed off his array of skills, and maturation beyond his years with his carefully placed attack.

“I need this type of experience,” Zayas said. “Eight rounds against a tough opponent will only help me as I move forward in my career.

“The plan is to come back June 11 at The Garden on Puerto Rican Parade Weekend. That’s a special weekend for Puerto Ricans, and I am proud to represent my people.”

Zayas dedicated the fight to his trainer, Javiel Centeno, who was ringside but didn’t work the corner after he was hospitalized with sciatica on Friday evening.