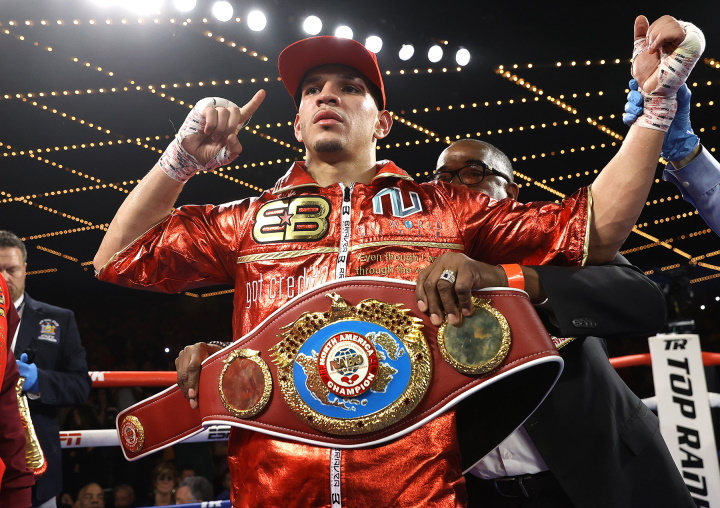 Edgar Berlanga sold out the Hulu Theater at Madison Square Garden to the tune of 5,158 fans. Berlanga prevailed via 10-round unanimous decision (96-94 and 97-93 2x) over Steve Rolls in his main event debut.

It wasn’t the sterling knockout Berlanga sought, but it was an important step forward for the Brooklyn native. Berlanga (19-0, 16 KOs) tore his biceps last October against Marcelo Esteban Coceres and spent the last 12 weeks training in Las Vegas.

The biceps injury did not flare up, as Berlanga stalked the Canadian veteran. Rolls had pockets of success, especially with right hands to Berlanga’s head and midsection.

Berlanga was never able to hurt Rolls, who was able to use his movement and defensive abilities to avoid the big puncher’s incoming bombs.

Berlanga explained that he wasn’t able to connect with his usual big punches because Rolls was “fighting scared.”

“You could tell that he was fighting scared. Every time I reached in or threw something, he’s pulling back, running the whole fight. I was looking for a big shot. My corner was telling me use a jab. My elbow was bothering me a little bit,” Berlanga said.

“He was a scared fighter. It’s tough to land your shots when he’s scared, especially moving back. When he fought GGG, he brought it to GGG. With me, he tried to use that running tactic.

“My elbow starting hurting me in like the second round but no excuses. We got the biceps torn in the last fight, came back in four months and got to it.”

Carrington, the latest knockout puncher from the Brownsville section of Brooklyn, knocked Andujar out cold with left hook. The Dominican veteran gave Carrington the most competitive run of his young career, but it was mostly one-sided traffic that ended in devastating fashion.

Carrington said, “I want to thank Brownsville and all of Brooklyn for coming out to support me. Fighting as a pro at Madison Square Garden was a dream come true. This is only the beginning.”