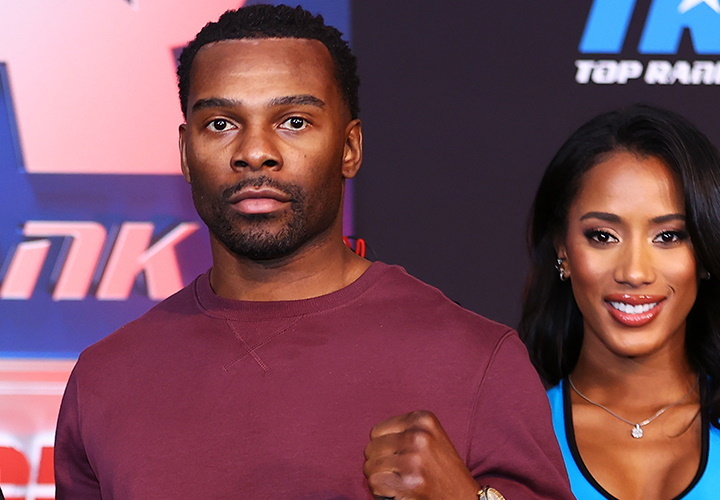 NEW YORK – Steve Rolls realizes that much of the boxing public’s perception is that he has been brought to “The Mecca of Boxing” to enable Edgar Berlanga to regain some momentum Saturday night.

Rolls just doesn’t understand why that seems to be the prevailing feeling among boxing fans and media. The Toronto native still has lost only to Gennadiy Golovkin, who knocked out Rolls in the fourth round of what had been a competitive fight in June 2019 at Madison Square Garden.

Brooklyn’s Berlanga (18-0, 16 KOs) will fight for the first time since he underwent surgery to repair a torn left biceps.

The 24-year-old super middleweight suffered that injury during the third round of his closely contested, 10-round, unanimous-decision victory over Argentina’s Marcelo Coceres (30-3-1, 16 KOs) on October 9 in Las Vegas. Berlanga got up from a flash knockdown late in the ninth round and won that bout by the same score, 96-93, on all three cards on the Tyson Fury-Deontay Wilder undercard at T-Mobile Arena.

Most handicappers have still established Berlanga as a 16-1 favorite over Rolls in a 10-round main event ESPN will air from Madison Square Garden’s Hulu Theater (10 p.m. ET).

“I don’t have as much pressure on me as him, because he has all the stars coming out to see him and it’s his hometown,” Rolls told BoxingScene.com following a press conference Thursday, when asked about Brooklyn’s Berlanga. “You know what I mean? You know, so he’s probably gonna wanna make a statement. And plus, all the talking everybody’s been doing about his last fight. But I still have pressure because, you know what? I can still win a world title. That’s what I set out to do when I got in this game.

“I only got one loss, man. It’s so funny how people just kinda like look over me, and I only have one loss, to Triple-G. You know what I mean? It’s not even like a loss to a guy where, ‘Oh, you were supposed to beat him.’ It was to Golovkin, and he was at the top at the time. So, I mean, let ‘em sleep on me.”

Rolls (21-1, 12 KOs) doesn’t possess the type of power to have kept Golovkin, whose chin is one of his greatest assets, off of him. The 37-year-old veteran still gave Golovkin (41-1-1, 36 KOs) trouble at times, particularly during the second round.

Eventually, Golovkin’s devastating left hand sent Rolls to the canvas, face first, in the fourth round, which abruptly brought an end to their scheduled 12-round bout.

“If you watch the fight, all the way up until the fourth it was a competitive fight,” Rolls said. “Like I’m just being real. It was a competitive fight. I wasn’t getting blown out or people thought, ‘Oh, this isn’t gonna be competitive.’ It was a good fight. But he has the experience. I made a mistake and he capitalized on it. And, you know, he was able to do what he did. But I learned a lot from that. It made me such a better fighter. It’s a tough pill to swallow because I’m very competitive. You know what I mean? It was my first loss, but in the long run it actually helped me.”