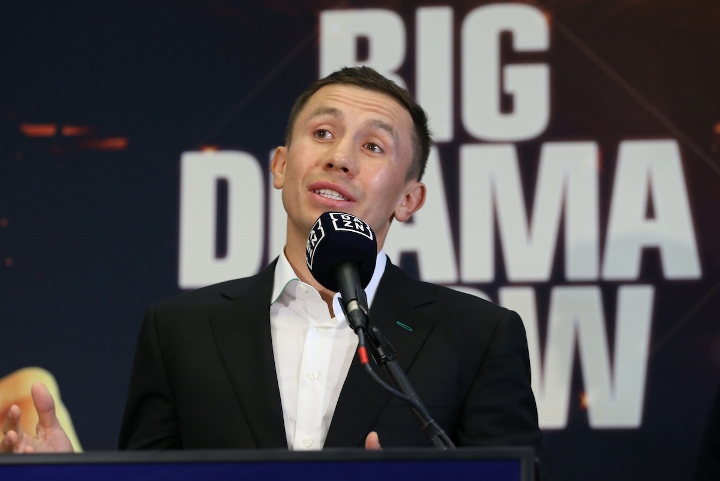 IBF, IBO middleweight champion Gennadiy Golovkin is a few weeks away from his anticipated ring return.

Golovkin will travel over to hostile territory to collide with WBA champion Ryota Murata on April 9th at Super Arena in Saitama, Japan.

The 40-year-old champion has been out of the ring since December of 2020.

A win over Murata will lead to a trilogy fight with undisputed super middleweight world champion Saul ‘Canelo’ Alvarez in September. The trilogy fight may depend on Canelo winning his fight with WBA light heavyweight champion Dmitry Bivol on May 7.

Golovkin is a very solid favorite to beat Murata – but he’s not overlooking his upcoming foe and has a lot of respect for him.

“He’s the pride and the star of his country. I know the organizers of this event. Everything will be top class, and I’m very excited to be a part of this amazing event. He’s an Olympic champion and he’s the current world champion holding the WBA title,” Golovkin told The MMA Hour.

Next month will not be the first time for Golovkin and Murata to share a ring together. The two champions have actually sparred in the past.

“It did take place but that was a long time ago. It was not the pure sparring approach that he came to spar me. I learned during those sessions that Murata is a very serious fighter with a high boxing IQ,” Golovkin said.

Murata will be coming back from a long layoff, with his last fight taking place in December of 2019, when he knocked out Steven Butler in five rounds.

And Golovkin took down mandatory challenger Kamil Szeremeta in seven rounds in December of 2020.