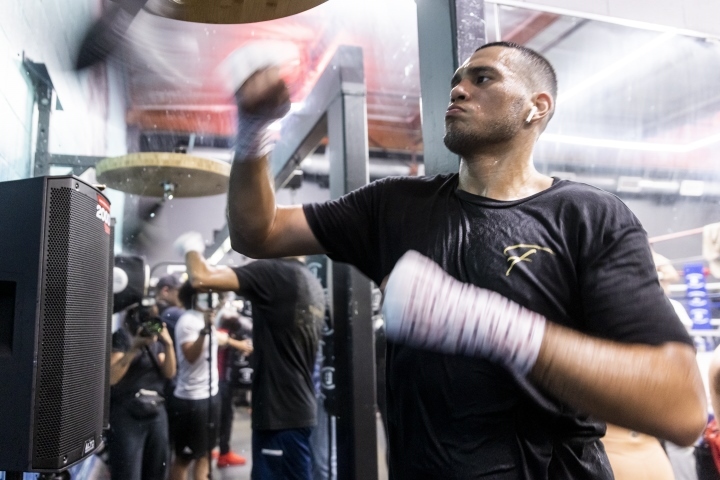 Jermell Charlo thinks David Benavidez, for all his ability, is a weight bully.

For that reason, Charlo, who holds three of the four major belts in the 154-pound division, is not totally sold on the idea of his twin brother, the middleweight titlist Jermall, moving up in weight to face Benavidez, the 168-pound contender. It would not be on a level playing field, the 154-pound Charlo said.

“A 160-pounder (Jermall Charlo) coming up to fight Benavidez to me, personally, is just like, ‘hmm, you still picking on the smaller guy,” Charlo told Brian Custer on The Last Stand Podcast.

Demand for a fight between Jermall and Benavidez, widely regarded as one of the better matchups in the sport today, has been percolating for some time. And unlike other fantasy fights, this one is rooted in some semblance of reality; both fighters are managed by Al Haymon of Premier Boxing Champions.

While technically there are only eight pounds separating the two fighters, Jermell believes the disparity would be much greater on the night of the hypothetical fight, claiming that Benavidez is really simply a cruiserweight, or even a heavyweight, in disguise, who is somehow able to boil his frame down to meet the 168-pound mark.

“I like Benavidez heart, I like his style, I like how he’s relentless on his punching,” Charlo said. “I think personally that Benavidez would be better at heavyweight. He’s a big ol’ mother——s.

“He fights out of his weight division. He’s just beating up on little mother—–s. For real, for real.”

Benavidez, no doubt, has carved out a reputation as one of the more fan-friendly, offensive-minded fighters in the sport. The Phoenix, Arizona native has not gone the distance since his win over Ronald Gavril in 2018. In his last fight, he battered and stopped late replacement Kyrone Davis, a natural 154-pounder, in the seventh round. Benavidez is set to face veteran middleweight contender David Lemieux on May 21 in his hometown of Phoenix.

Charlo (34-1-1, 18 KOs), who is gearing up for a unification bout against WBO 154-pound titlist Brian Castano in a rematch of last year’s draw, feels Benavidez’s success, however, is largely due to his relatively large size for 168.

“Lets keep it real: Benavidez is not a real 168-pounder,” Charlo continued. “He can fight any of the 189, cruiserweights or even heavier. That’s his real weight. Then he’ll get a better challenge.”

Charlo added, “He won’t ever get the respect until he fights someone at the top over there at his actual weight. Feel out, become your guy, become the big guy.”

“Benavidez is a great fight for my twin brother because that’s, hey, you gotta move your head, hit him with the hard shots and maybe knock him out so that you don’t get the crowd involved,” Charlo said.

Pressure for that fight figures only to increase after both fighters missed out on a chance to face Canelo Alvarez this year. The Mexican superstar took his time fielding offers from Haymon and Eddie Hearn of Matchroom Boxing, but he ultimately chose to link up with Hearn, accepting Hearn’s lucrative two-fight deal to face light heavyweight titlist Dmitry Bivol in the spring and Gennadiy Golovkin later this year on DAZN. Haymon’s competitive offer would have called for Alvarez to face the middleweight Charlo in the spring and Benavidez in the fall.