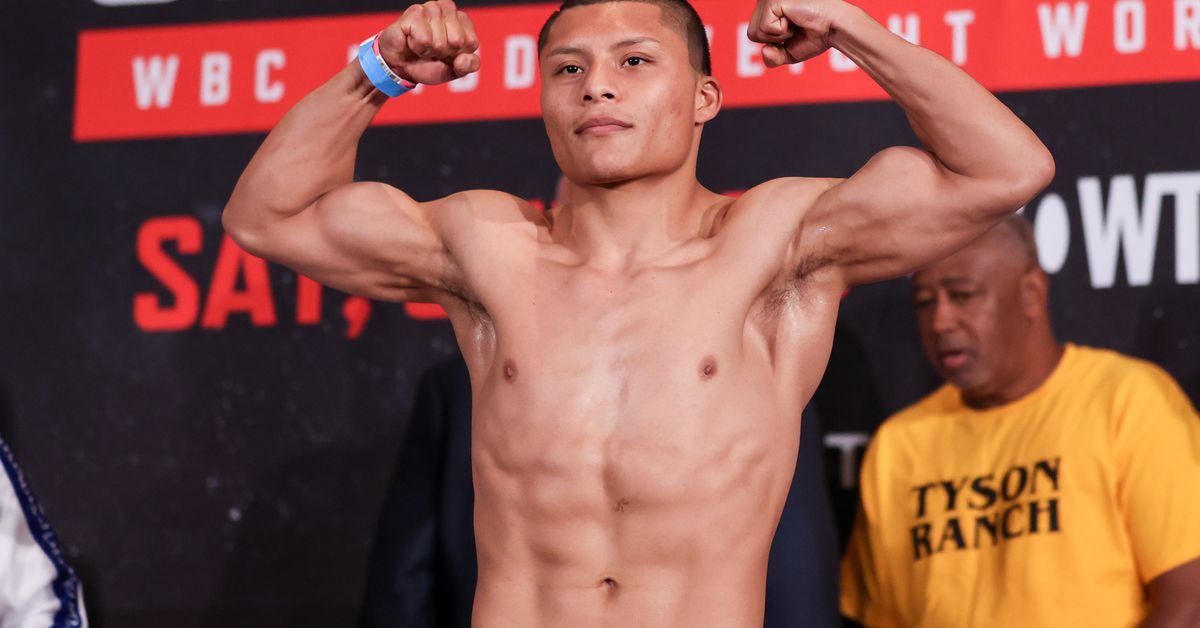 As reported last month, Isaac Cruz (22-2-1, 15 KO) meets Yuriorkis Gamboa (30-4, 18 KO) in the lightweight co-feature. It’s a bounce-back fight for Cruz after his narrow loss to Gervonta Davis last time out; “El Ciclon de Guantanamo” is coming off of two losses, hasn’t fought since 2020, and is obviously completely shot at this point.

“I can’t wait to be back in the ring and to fight at AT&T Stadium,” said Cruz. “I love the fans in Texas, they always give me tremendous support. My promoter, Manny Pacquiao, has fought at AT&T Stadium before and won both times. I’m excited to follow in his footsteps against a very accomplished former champion in Gamboa. I’m coming to show the fans why I’m one of the best lightweights in the world and to drive Gamboa into retirement on April 16.”

“I always come to the ring to display my talents and April 16 will be no different,” said Gamboa. “It’s very motivating to be facing a young, strong opponent like Isaac Cruz. I’m going to test him and see if he can stand up to my power. I’m coming to win and make a big statement that I still have what it takes to become champion again.”

“It’s a dream come true to be on a high-stakes, stacked card like this,” said Valenzuela. “I’ve admired and studied Spence for a long time, especially because we’re both lefties. I can’t wait to get in the ring. I’m not overlooking or underestimating Francisco Vargas in any way. I’m expecting fireworks. You always get a big fight when two Mexican warriors go head-to-head, so I know the fans are going to be delighted with what they see on April 16.”

“It is an honor to be on such a big card with so many great fighters,” said Vargas. “I’m going to come prepared for this fight and ready to leave the ring with a victory. I know Valenzuela will be trying to make a statement, but I’m coming to do the same. As always, the fans can expect a tremendous fight from start to finish.”

The PPV opener pits Cody Crowley (20-0, 9 KO) against Josesito Lopez (38-8, 21 KO). Crowley upset IBF #1 welterweight contender Kudratillo Abdukakhorov in December, which somehow only earned him the #14 slot in their rankings while Jaron Ennis and Custio Clayton got the call to meet in a final eliminator. Lopez, on the other hand, has been out for almost a year and a half but is on a nice little 5-1 run marred only by a narrow loss to Keith Thurman.

“After my win in December on SHOWTIME, I’m ready to accept the next challenge on my journey to becoming welterweight champion of the world,” said Crowley. “Josesito Lopez is always tough and he brings an exciting style to the table. Unfortunately for him, he will discover what 20 fighters before him have learned, which is that I will not be stopped from achieving my destiny. I want to thank my team for this opportunity to display my skills, heart and relentlessness on this great card at the home of the Dallas Cowboys.”

“I’m eager and very motivated to step back in the ring and prove myself as one of the best fighters in the world,” said Lopez. “I expect a stiff challenge from Crowley and the fans can expect to see me at my very best. I’m in great shape and ready to put everything on the line. You will definitely want to make sure you don’t miss my fight on April 16.”