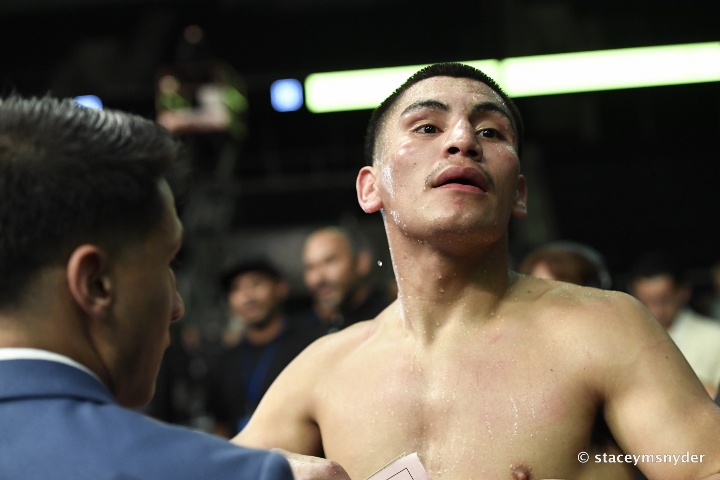 The good news for Vergil Ortiz Jr. is that the recovery process has already begun.

Unfortunately, it also means an even longer delay ahead of his next fight—and first of the year.

The unbeaten, top-rated welterweight contender provided an update following news of his having to withdraw from a scheduled fight with England’s Michael McKinson this Saturday in Los Angeles. As previously reported by BoxingScene.com, Ortiz (18-0, 18KOs) was hospitalized to treat rhabdomyolysis, commonly known as rhabdo which is a serious medical condition which occurs when damaged muscle tissue releases proteins into the bloodstream. Long-term effects include kidney or heart damage, obviously a risk that no boxer should be expected to take for the sake of moving forward with a fight.

“First and foremost I am very sorry and disappointed to not be fighting this Saturday,” Ortiz stated hours after it was first reported of his withdrawal. “Camp was going great. I was doing very good in sparring and training in general. But for the last [two] weeks I didn’t feel like myself. I just felt like my body was deteriorating and I didn’t know why and it was frustrating.

Being the fighter that I am, I tried toughing it out, but when it’s your own body fighting against you there’s little you can do. Luckily my dad was also able to tell I wasn’t right and took me to the [d]octor. We ran some tests and the doctor concluded that I had Rhabdomyolysis.”

For now, the show will go on without Ortiz though there is also concern of the DAZN-televised event being canceled outright. A replacement opponent is already being sought for McKinson (21-0, 2KOs), whose team already declined one offer though with another potential option to come through pending approval from the California State Athletic Commission.

Meanwhile, Ortiz’s already seven-month gap between fights will grow even longer. The red-hot knockout artist from Grand Prairie, Texas—who turns 24 later this month—was looking forward to building toward a potential title shot versus WBO welterweight champion Terence ‘Bud’ Crawford (38-0, 29KOs), as a win on Saturday would have secured his place as the mandatory challenger.

He will instead have to take on a new plan—recover and rebuild.

“I was hospitalized yesterday and had to stay overnight. It could’ve been a lot worse and I’m thankful that we caught it on time,” notes Ortiz in his best effort to find a silver lining. “I am very sorry if I let you guys down believe me if there was a hair of a chance of me fighting, I would be.”