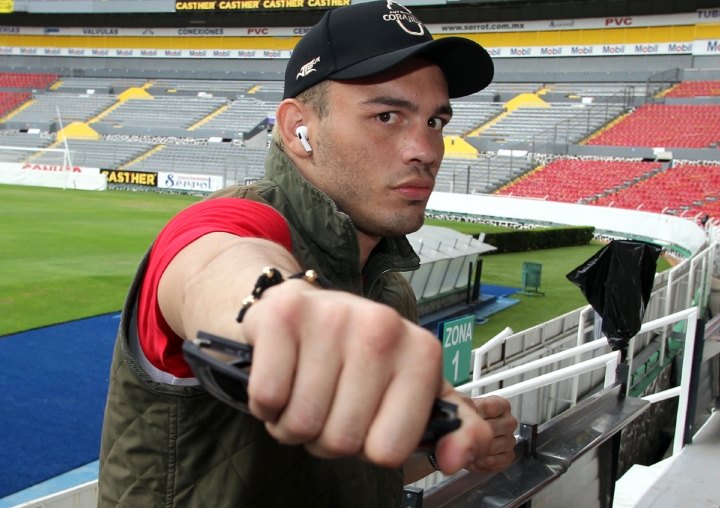 It’s not your father’s boxing schedule.

While stars like Canelo Alvarez are still preeminent in the ways they’ve been for several years, much of the chatter around the sport these days is generated by the prospect of fighters from other combative strains making a crossover to the ring, or in the case of Jake Paul, from the world of social media.

Love him or loathe him, Paul provided one of 2021’s most memorable highlights when he rendered ex-UFC champion Tyron Woodley unconscious with a single shot in a December rematch that came five months after a first encounter that generated around a half-million pay-per-view buys.

Lately, he’s been busy promoting the female showdown between Katie Taylor and Amanda Serrano that’ll make history when it headlines at Madison Square Garden next month.

Serrano, a seven-division champion who’s lost once in 13 years as a pro, significantly boosted her profile with consecutive appearances on Paul’s last two PPV undercards.

Once April 30 has come and gone, it’s expected he’ll return focus to his own combat career with an announcement of an opponent for a fight expected sometime in the back half of 2022.

“He’s definitely anxious to get back in the ring. He’s got a lot of other business going on, took a little time off. But we’re engaged.”

Paul signed a multi-bout deal last year with the premium cable giant, which produced both fights with Woodley – one in Cleveland and one in Tampa. The latter match was thrown together after Paul’s scheduled opponent, Tommy Fury, pulled out with an injury.

“I think (Jake has) been a net positive for the boxing business,” Espinoza said.

“He’s brought in new eyeballs. They did a poll in the middle of last year, June 2021, and asked people, ‘Are they a fan of the sport?” and they had a list of different sports. Boxing was the No. 4 sport behind football, basketball, and baseball in the U.S., ahead of tennis, golf, hockey, and MMA.”

It’ll obviously take a worthwhile event to continue that momentum.

And with all due respect to Fury – a handsome, outspoken kid with a strong social media presence of his own – he’s not going to move the needle any great distance beyond where it’s already been.

Instead, if Paul or Espinoza call me looking for counsel, I’m all in on one guy:

The son of a Mexican legend and Hall of Fame inductee, Chavez Jr. has been a lightning rod in his own right thanks to years of uninspiring performances, blown weigh-ins and failed drug tests.

He was beaten by ring novice Anderson Silva last June but would still represent the first full-fledged boxer Paul has met while building his brand, something the unbeaten personality’s detractors have been demanding.

Chavez said in December that he’d been contacted by Paul’s team and had expressed an interest in the idea, not to mention the millions it could generate. Paul said at a Taylor-Serrano media event in February that he wants the fight, in spite of Chavez’s well-earned reputation for marginal behavior.

“We have to figure out the set-up of it – obviously he’s making bold asks right off the jump,” he said. “But he’s a little cuckoo, I think everybody in the boxing industry knows that he’s a little cuckoo. So, we’ll see, I want the fight, but some people are saying he might not even show up.”

Though he’s not held a title in 10 years and not beaten a recognized name in more than half that time, Chavez would still represent a significant step up from what Paul’s been matched with skills-wise and would be a relevant enough foil to generate competitive interest and the cash that comes with it.

“I want the winner to take all when I fight Jake Paul; the winner takes all of the money, we’re risking our lives in the ring and I want the promoter to take a lower percentage,” Chavez said on Instagram.

“It’s going to be great business for everyone.”

Fitzbitz says: There’s lots of reasons to like Waseem here. He’s strong. He has a good KO rate. He was a near miss in a previous title bout. But he won’t find Edwards enough. Edwards by decision (85/15)

Fitzbitz says: This comes down to a simple question: Can Yabuki do the same thing he did last time? He was trailing, but he rallied for a finish. Until I see it again, my guess is no. Teraji by decision (75/25)

NOTE: Fights previewed are only those involving a sanctioning body’s full-fledged title-holder – no interim, diamond, silver, etc. Fights for WBA “world championships” are only included if no “super champion” exists in the weight class.

Lyle Fitzsimmons has covered professional boxing since 1995 and written a weekly column for Boxing Scene since 2008. He is a full voting member of the Boxing Writers Association of America. Reach him at fitzbitz@msn.com or follow him on Twitter – @fitzbitz.