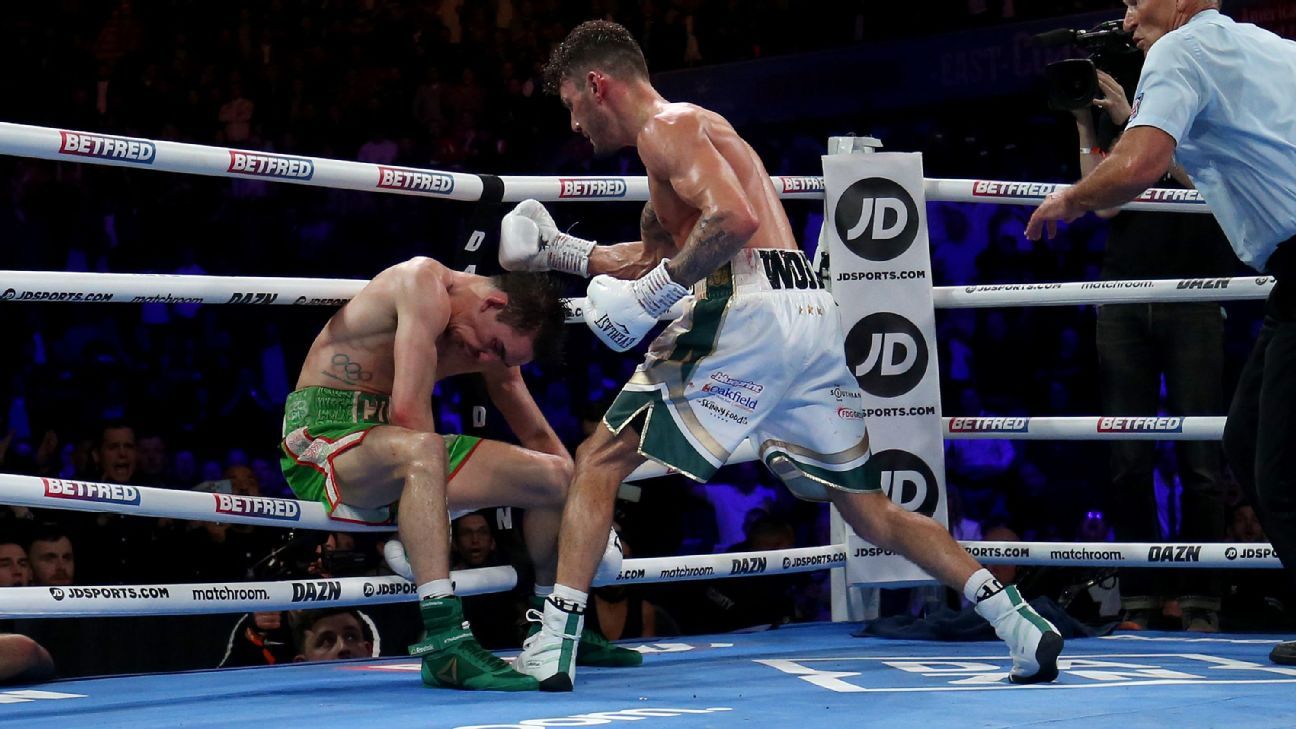 Leigh Wood produced a stunning comeback win to halt Michael Conlan with a brutal knockout in the 12th round and retain his WBA “regular” world featherweight title Saturday in front of his home city crowd at the Nottingham Arena in England.

For the second successive fight, Wood clinched the victory in the final round, but the dramatic finish was overshadowed by immediate concern for Conlan, who fell backward through the ropes and off the ring apron.

Conlan was treated by medics at ringside and was quickly taken to a nearby hospital, where he was conscious and in stable condition, according to a spokesperson for Matchroom, which promoted the fight.

For Wood (26-2, 16 KOs), 33, it was another late, dramatic win after he produced an upset to stop China’s Xu Can in the final round last year in his first world title fight. Wood was dominated early on, including being knocked down in the first round, but he recovered to floor Conlan late in the 11th round and resumed his attack in the 12th, knocking Conlan through the ropes at 1 minute, 25 seconds amid a barrage of punches.

“I hit him with everything, but he’s so tough,” Wood said. “I’m just thinking about Mick now. It was a bad knockout.”

“We should be celebrating one of the best knockouts I’ve ever seen, but our thoughts are with Michael right now,” Hearn said.

Conlan (16-1, 8 KOs), 30, from Belfast, Northern Ireland, had controlled much of the fight and nearly took the title in the opening round. Wood did most of the pressing in the first, but was then caught by a cleverly disguised left hand by Conlan late in the round, which left him flat on his back for a count.

It was a great shot from Conlan, who had Wood in trouble again early in the second round as he continually found Wood with his left hooks. Wood looked dazed for much of the second round, getting caught with clean left hooks as Conlan stamped his authority on the fight.

Conlan, the 2012 Olympic bronze medalist, began the third carefully, before staggering Wood with a right hand in the last minute of the round. But the fight turned in the fourth round as Wood fought back, attacking with flurries of punches.

Wood showed plenty of aggression in Rounds 5 and 6, but the cleaner and sharper punches came from the challenger. In the sixth, Conlan nailed Wood with a crunching right hook to the chin that the champion did well to shrug off.

Wood showed plenty of heart in the eighth, when he put Conlan under the most pressure he had experienced to that point in the fight. Wood was full of fire in the 10th round, giving Conlan a torrid time when the Irishman was sat on the ropes.

Wood was getting tagged in the 11th, but he found the strength and courage under pressure to land a left hook that sent Conlan to the canvas. Conlan complained it was a slip, but he was still given a count at the end of the 11th, and it spurred on Wood to produce a stunning turnaround in the final round again.

As the start of the 12th, Wood launched a ferocious and relentless attack, which left Conlan out on his feet before the Irishman collapsed through the ropes, falling backward out of the ring.