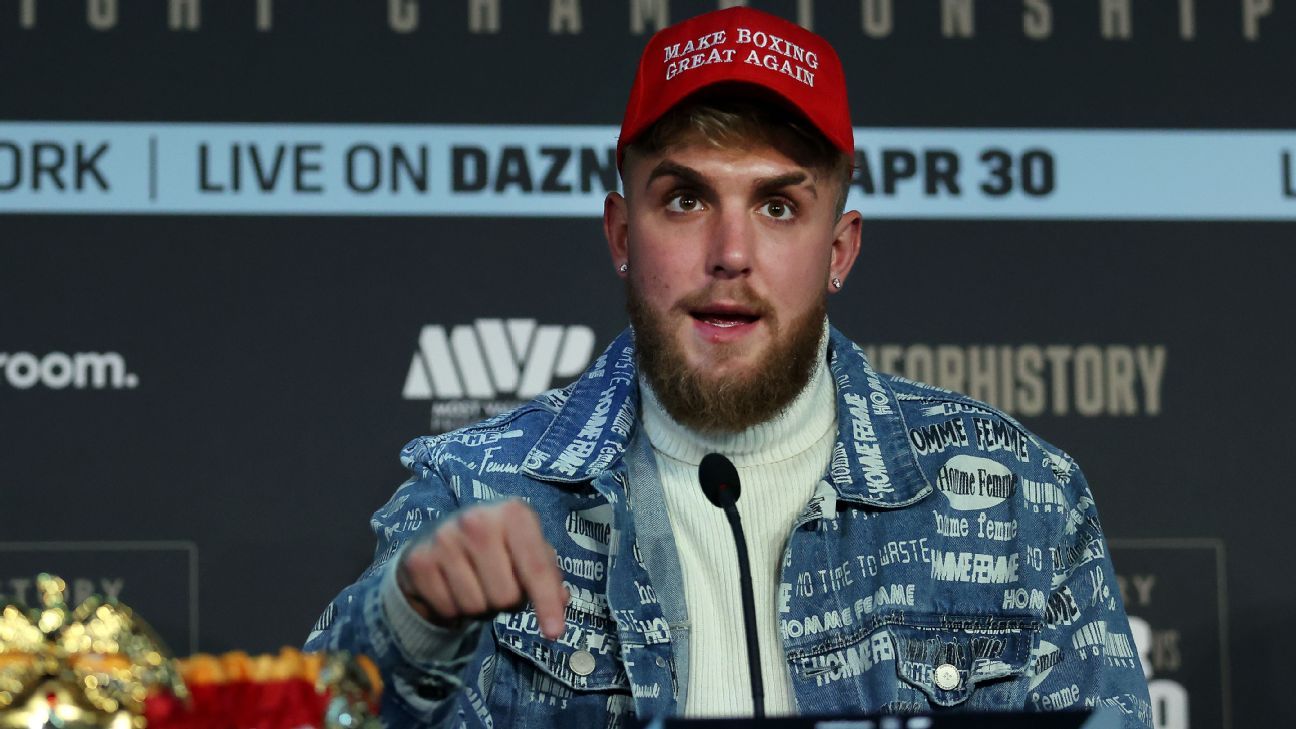 Jake Paul says he would be willing to fight once in the UFC against either Conor McGregor or Jorge Masvidal — with some caveats.

The YouTube influencer-turned-boxer said Saturday in a statement to ESPN that he would sign a one-fight UFC contract to compete against either McGregor or Masvidal in MMA with a wager on the line. Paul first tweeted about the idea Saturday morning.

Dana – Since you like me now, how about a 1 fight UFC deal to fight Conor.

If I win, you agree to my UFC fighter pay and healthcare proposal.

Paul proposes that if he wins, the UFC must set up a plan to pay fighters 50% of company revenue and give fighters full healthcare. If Paul loses, he said he would donate his entire purse to UFC fighters making less than $50,000 per fight “and I will never mention the UFC again.”

Documents cited in the antitrust lawsuit filed against the UFC put fighter pay at about 18% to 20% of company revenue.

“Fighting Conor is what I want most, but would fight Masvidal as well,” Paul said. “I know it might seem impossible to beat these guys in MMA, but when you believe, you can achieve anything. I would ask for six months to train.”

The UFC has yet to respond to Paul’s pitch and it would be outside the norm for the promotion to do so. But UFC president Dana White, who has feuded with Paul publicly over the past year, wouldn’t close the door on Paul one day fighting in the UFC, he said in an interview earlier this year with TSN.

Paul and his team said they are serious about the proposal. In his statement, Paul referenced wanting to emulate Marvin Miller, the longtime Major League Baseball Players Association executive who made the baseball players’ union one of the strongest unions in the United States. UFC fighters are not unionized and are designated as independent contractors.

“This is bigger than me,” Paul said. “This is my Marvin Miller energy.”

Paul said he would want a purse from the UFC to fight McGregor or Masvidal somewhere in the range of what CM Punk or Brock Lesnar were paid. Punk reportedly made about $1 million per fight, while Lesnar’s guaranteed purse for his last bout, UFC 200 in 2016, was $2.5 million.

Paul said that would be less than he is currently making in boxing. In 2021, Paul beat former UFC fighter Ben Askren and former UFC welterweight champion Tyron Woodley twice, most recently via one-punch knockout last December.

“If I lose I would donate my earnings from the fight to fighters who make less than $50K per fight, with a higher share going to athletes who make the least but have been in the UFC longer,” Paul said. “And I will never mention UFC again.”

Paul said if he wins, he’d want the UFC to commit to a five-year plan that would gradually give fighters 50% of revenue, plus “year-round healthcare,” including benefits that would continue after a fighter’s UFC career “based on tenure.”

“There are no losers in this proposal,” Paul said. “UFC has a massive revenue generating event. If I win, Dana will change the future of UFC fighters forever. If I lose there will be a one-time bonus to a lot of fighters, MMA doesn’t have to hear from me again and Conor [or] Jorge win again and get to shut up Jake Paul.”

Paul, 25, has never competed in MMA before. He was a high school wrestler and is building a lucrative career in boxing, though the level of his competition has been criticized. There is no doubting his considerable fame, though, especially among a younger demographic. Paul’s boxing matches have been major-scale events and his help promoting the first-ever women’s boxing headliner at Madison Square Garden — Amanda Serrano vs. Katie Taylor — led to a sellout.

Most Valuable Promotions, a company co-founded by Paul and his business partner and former UFC chief financial officer Nakisa Bidarian, are representing Serrano. Bidarian said Paul is serious about his plan to do a one-fight deal in the UFC and there’s little doubt it would be a monstrous moneymaker for all involved.

“While the UFC business has meaningfully changed for the better since my employment there six years ago, I truly believe a UFC fight between Conor and Jake on ESPN would be the biggest MMA PPV event in history,” Bidarian said.

Those in the MMA community are split on Paul’s rhetoric about helping fighters. Some fighters, coaches and managers believe it’s a positive thing, regardless if Paul is being sincere or not. Others think the social media star’s words are self-serving and won’t lead anywhere.

“The spotlight he is shining on MMA-related issues is only worth the tweets that promote it,” one prominent manager told ESPN last month. “Will not change anything. Not even a little.”