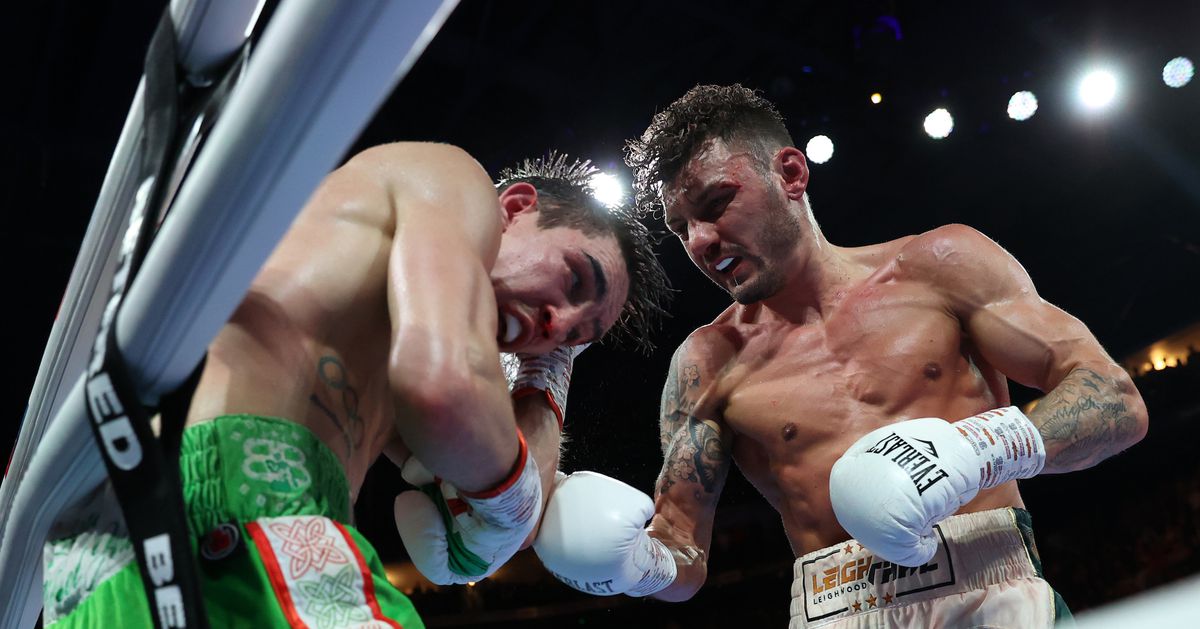 UPDATE: Matchroom’s Frank Smith says that Conlan was “conscious and stable” when he arrived at the hospital.

Leigh Wood scored one of the most dramatic, unbelievable comeback knockouts you’ll ever see tonight, roaring back to stop Michael Conlan in the 12th and final round of their main event in Nottingham, England.

It was a truly unbelievable fight, with Conlan looking absolutely class for most of the bout, dropping Wood hard right at the end of the first round and owning the ring for much of the first even rounds.

But with Wood doggedly refusing to fold in the fight no matter how many good shots Conlan landed to the head and body, the fight just kept going, with both men fatigued and showing the signs of war in the latter rounds.

Conlan (16-1, 8 KO) was knocked down late in round 11, and then hurt and knocked through the ropes and out of the ring about halfway into round 12. The fight was immediately stopped, and it became clear very quickly that there was real concern about Conlan.

Conlan was eventually taken out on a stretcher, reportedly, though there have been some reports that he was awake and responding backstage.

Like Leigh Wood and promoter Eddie Hearn in their post-fight comments, for now we will just say this was an excellent fight, an amazing display of heart and passion from both men, and send our best wishes to Michael Conlan and his family.

Not a performance from middleweight prospect Agyarko (11-0, 7 KO) that’s going to dramatically turn a lot of heads, but a solid 10 rounds for him, as he adjusted more and more to the southpaw style of Rubio (18-2, 9 KO) as the fight wore on, and won a convincing and clear decision.

Judges had it 98-92, 100-90, and 100-90. Bad Left Hook had it 99-91 for Agyarko, who seemed to have a chance to finish in the eighth round when he rocked Rubio pretty good, but wasn’t able to fully capitalize, and chose not to blow himself up chasing a finish with Rubio showing he was capable of surviving and holding to get out of danger.

The 25-year-old Harper was last seen in November, when she was — let’s not mince words — demolished by Alycia Baumgardner, losing her WBC 130 lb title. She moved up to lightweight for this one and looked fit and strong, and had to deal with a pretty nasty cut, which her corner did a good job to limit in terms of the impact it had on the fight.

“This is just a fresh start for me, it was about coming in and getting the rounds. I’m lacking in my experience and these are the fights I need,” Harper said after the win. “It was my first time experiencing a cut and I had to learn to deal with that in the ring tonight. This year I need to just be a learning year.”

Asked more specifically about her plans, Harper said she’d take a week off and get back in the gym, then travel to the U.S. to watch Taylor vs Serrano in April, and look to stay busy this year.

Promoter Eddie Hearn floated the idea of Harper letting the cut heal up, and then possibly revisiting the plan to fight Heather Hardy, which was tonight’s originally scheduled fight.

The 35-year-old Vazquez (44-11, 17 KO) looked shot here, to be honest, but don’t discount what Cully (14-0, 8 KO) did right, either. The 26-year-old Irish southpaw looked sharp, used his length to his advantage well enough — 6’2” lightweights are a rare bird — and when he seemed to sense that the former IBF titleholder didn’t have much in the tank, he went for it.

Vazquez was down in the third, hurt late in the fourth, and then knocked out early in the fifth. That could be it for him at this level, really. He looked notably slower and creakier than he did when he was robbed against Lewis Ritson in 2020, or against Ohara Davies in 2019. He’s made a nice little back-end of his career with regular fights in the UK and elsewhere abroad, and there might be enough gas in the tank to fight lower-level fights at home in Mexico, as he did a couple times last year. This could also just have been a bad night, a bad camp, just didn’t have the legs, whatever. I hesitate to fully count him out of having another spoiler night or three.

Cully can be really happy with the fashion of this win, though. It’s a lot more than Davies or Ritson did against the crafty old man.

The 23-year-old Ryan took a big risk with a huge step up in competition in her fourth fight, taking on former two-weight world titleholder Farias, and the result didn’t pay off. Farias took the split on scores of 95-94 and 97-94 her way, and Ryan got the other card 97-93. Bad Left Hook had it 96-93 for Farias, who was questionably docked a point by referee Kevin Parker in the 10th and final round, but to be fair, Parker had warned her for it a couple of times. It was at least consistent.

Ryan (3-1, 2 KO) has nothing to be ashamed of here, just stuff to get back and work on. She can fight; she hung tough here with Farias (27-5, 10 KO), who had lost three straight coming in, but they were two to Jessica McCaskill, who went on to become undisputed welterweight champion, and one to Mikaela Mayer, who is among the best women in the sport pound-for-pound. And she pushed McCaskill hard both times at 140.

It’s a big one for Farias, keeps her name out there, breaks the losing streak, and she did it on the road against a favored home fighter. This is one we could see again; Ryan’s team may try to do it immediately, or they might get her a bit more seasoning and try to do it again late this year, early next year. And it was a good fight, too, competitive in basically every round.