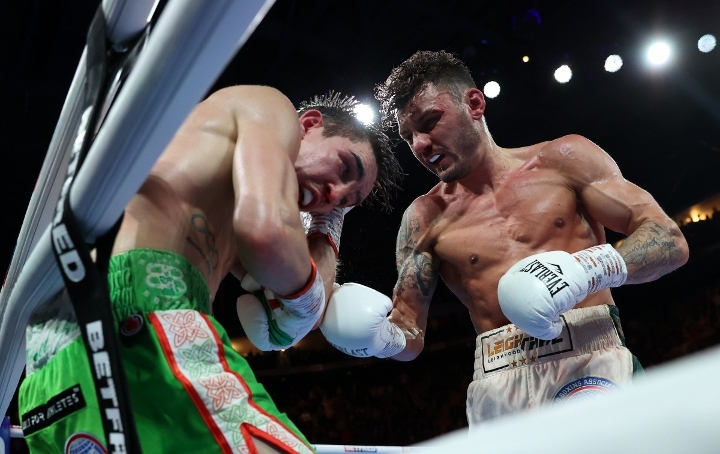 Leigh Wood drew closer to Michael Conlan on the scorecards than Eddie Hearn thought entering the 12th round Saturday night.

Wood’s promoter assumed Conlan had a larger lead on the scorecards than 105-102, 104-103, 104-103. Regardless, Hearn was convinced that his fighter needed a knockout in the 12th and final round of their WBA world featherweight title fight at Motorpoint Arena in Nottingham, England, Wood’s hometown.

A resilient Wood delivered that knockout when he landed a right hand to the side of Conlan’s head. That shot knocked Conlan cold and made Wood’s courageous challenger fall backward through the ropes, and onto the arena floor.

Everyone ringside expressed concern for Belfast’s Conlan following his frightening fall, including Hearn.

“We should be celebrating one of the greatest comebacks I’ve seen in a ring,” Hearn stated during his post-fight interview with DAZN. “But, of course, all we’re doing is praying for Michael Conlan. It was right above us. You know, he took him out, he fell through the ropes, the fight was over. And it was just the most brave, courageous fight back from Leigh Wood. He got taken out in the first round. He couldn’t find his legs for four or five rounds. I thought it was a masterclass from Michael Conlan through the middle stages, and even the back stages of the fight. Leigh come on in the 11th. And if I’m honest, coming out to the 12th round, I couldn’t really see a way that he could turn that fight around.

“To win that fight by knockout is one of the best comebacks in a fight. And, of course, our thoughts are with Michael Conlan. But this man as well showed so much heart tonight. You cannot believe what he went through. He never gave up. Not with one minute, 32 seconds to go in the fight. He never gave up. He never stopped believing. And Michael Conlan, he boxed a masterclass performance tonight. He was ahead going into the last round. … He was winning the fight for me, Michael Conlan. Leigh Wood had to knock Michael Conlan out in the 12th round to remain world champion. And he did it.”

Wood withstood an ominous start Saturday night to his first defense of the WBA belt he won from China’s Can Xu, whom Wood knocked out late in the 12th round July 31 at Matchroom Boxing’s headquarters in Brentwood, England.

Conlan’s left hand knocked Wood flat on his back a couple seconds before the bell sounded to end the first round. Wood was badly hurt when he reached his feet and didn’t appear to have recovered before the second round began.

Another left hand by Conlan shook Wood again just 40 seconds into the second round. He later regained his legs, though, and eventually made their fight competitive.

Wood landed a left hook that initiated a knockdown just before the 11th round concluded. Conlan contended that he slipped to the canvas, but Wood clearly landed a punch as Conlan’s legs came out from under him.