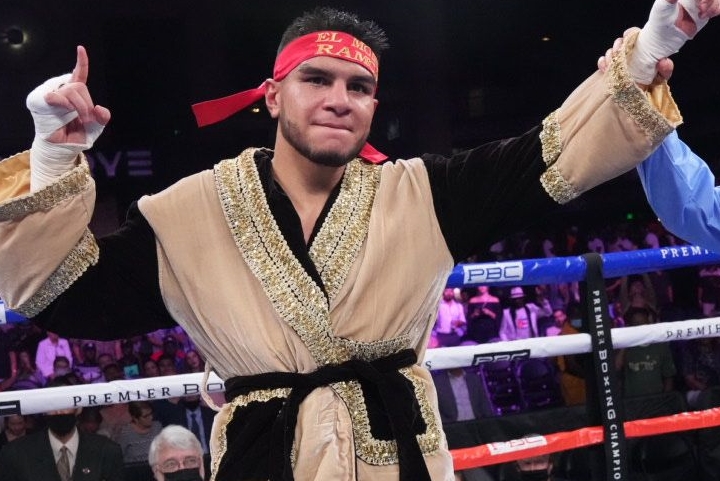 Jesus Ramos is prepared to make a run as a junior middleweight contender.

BoxingScene.com has learned that a deal is in place for a crossroads bout between Ramos and the resurgent Vladimir Hernandez. The pivotal matchup is tentatively set to take place February 5 on a Fox platform live from Michelob ULTRA Arena in Las Vegas.

The rapid rise by Ramos (17-0, 14KOs) saw the line blurred between prospect and contender regarding his 2021 campaign. The 20-year-old southpaw from Casa Grande, Arizona—whose uncle Abel is a current welterweight contender—claimed three wins in 2021, including back-to-back ten-round unanimous decisions over Javier Molina and Brian Mendoza.

The latter win marked Ramos’ official debut as a junior middleweight, having quickly outgrown the welterweight division. He has also outgrown the prospect level of competition, advancing perhaps to the point of missing out on 2021 Prospect of the Year honors as a result.

It is clear that title contention is in Ramos’ future, quite the vote of confidence in his career given the depth of talent in the 154-pound division and specifically under the Premier Boxing Champions (PBC) banner.

With that comes the decision to proceed with a dangerous showdown with Hernandez (13-4, 6KOs), who has turned around his career after a rough start.

The 32-year-old Mexican southpaw from Stockton, California is currently riding a three-fight win streak, all coming since the pandemic. Hernandez outworked former title challenger Alfredo Angulo to claim a ten-round decision over veteran contender Alfredo Angulo as part of an August 2020 PBC on Fox show in Los Angeles.

Just one fight came of his 2021 campaign, though representing the biggest win of his career. Former unified junior middleweight titlist Julian ‘J-Rock’ Williams was a 12-1 favorite heading into their October 9 clash at T-Mobile Arena in Las Vegas, only for Hernandez to outwork him over the second half of the contest to pull off a split decision victory. The bout aired live on ESPN2 and FS1 as part of a televised undercard preceding Tyson Fury’s 11th round knockout of Deontay Wilder in their epic trilogy bout atop a joint ESPN/Fox Sports PPV event.

Sources familiar with the situation inform BoxingScene.com that Ramos-Hernandez will air in a similar capacity. The bout will headline a televised undercard on a Fox platform preceding an already announced Fox Sports Pay-Per-View headlined by a welterweight bout between former unified titlist Keith Thurman (29-1, 22KOs) and Mario Barrios (26-1, 17KOs). PBC traditionally runs such shows on Fox’s prime network, which would trail the last of three NCAA Big East college basketball games scheduled for the day.