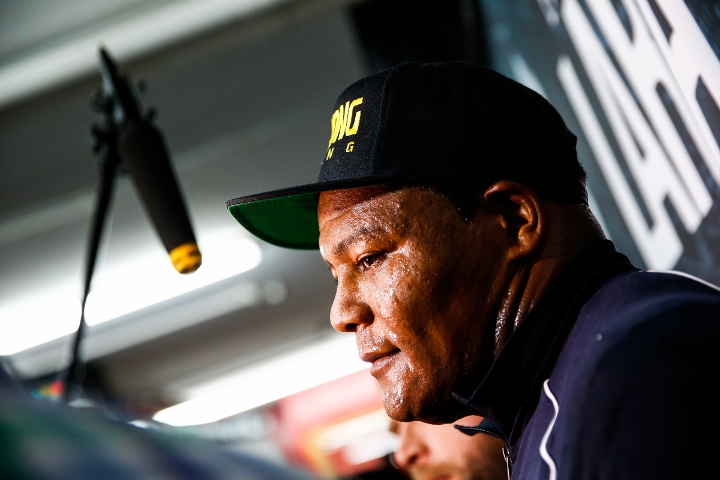 Efforts to stage a final title eliminator for the unbeaten Croatian will proceed to the next available ranked contender to determine the mandatory challenger for the IBF heavyweight title. As previously reported by BoxingScene.com, an invitation was submitted by the sanctioning body to Hrgovic and Luis Ortiz, the latter who declined the offer according to Hrgrovic’s team.

Messages for Ortiz and his team went unreturned as this goes to publish.

The invitation to enter talks for the final eliminator was submitted by the IBF on Monday, just two days after Miami’s Ortiz (33-2, 28KOs) earned a sixth-round stoppage of former titlist Charles Martin. The Cuban southpaw recovered from two knockdowns to score two of his own, the latter prompting a stoppage in the sixth round of their Fox Sports Pay-Per-View main event, which was billed as an IBF eliminator.

The sanctioning came with the understanding that the winner would next have to face Hrgovic (14-0, 12KOs). Ortiz and his team have since reversed course, likely with other plans already in place. There is speculation that the two-time title challenger—who turns 43 in March—will be steered towards a showdown with former unified heavyweight titlist Andy Ruiz Jr. (34-2, 22KOs) later this year, though such a matchup remains limited for the moment to loose talk.

Meanwhile, Hrgrovic is in a similar place as was the case a year ago—in need of a dance partner to move within one win of challenging for his first major title.

The next highest ranked contender after Ortiz and Hrgovic is Joseph Parker (30-2, 21KOs), a former WBO titlist from New Zealand who is riding a six-fight win streak. The last five have come since signing his original promotional deal with Matchroom Boxing in 2019. Matchroom also serves as co-promoter for Hrgovic, along with Wasserman Boxing who absorbed Sauerland Event and its fighters last March.

Both boxers are coming off wins in separate bouts last December.

Hrgovic—a 2016 Olympic Bronze medalist for Croatia who now trains in Miami—earned a third-round knockout of unbeaten but obscure heavyweight Emir Ahmatovic as part of a December 5 DAZN show from MGM Grand Garden Arena in Las Vegas. The bout marked his second consecutive third-round knockout over an undefeated heavyweight, having done the same to Marko Radonjic last September 10 in Klagenfurt, Australia.

Parker scored a repeat win over Derek Chisora, looking far more impressive in their December 18 rematch than was the case when he barely edged the veteran gatekeeper last May. Both bouts took place at the AO Arena in Manchester, England.

If Parker accepts the forthcoming invitation from the IBF, a fifteen-day negotiation period will be granted between the New Zealand heavyweight and Hrgovic. Neither party can enter an agreement for another bout once the eliminator is formally ordered, per IBF rule 9.a.2 (Purse Bids—No Intervening Bouts).

Should Parker decline, the IBF is required to continue down the line until finding an available challenger. The heavyweight contenders ranked after Parker are a trio of unbeaten contenders: France’s Tony Yoka (11-0, 9KOs), the 2016 Olympic Gold medalist; England’s Joe Joyce (13-0, 12KOs), who lost to Yoka in the 2016 Olympic finals in taking home a silver medal; and Germany’s Agit Kabayel (21-0, 13KOs).

GGG: Canelo is “Low Class” & I’M STILL Mexican Style!
Lara vs Montiel FULL FIGHT: April 30, 2016 – PBC on FOX
‘Give me two years and I’ll be knocking on the door’ David Adeleye on blockbuster boxing fights
Anthony Joshua vs Tyson Fury THE ROAD TO A SUPERFIGHT – In their OWN WORDS
Lubin vs Montero FULL FIGHT: July 16, 2016 | PBC on FS1