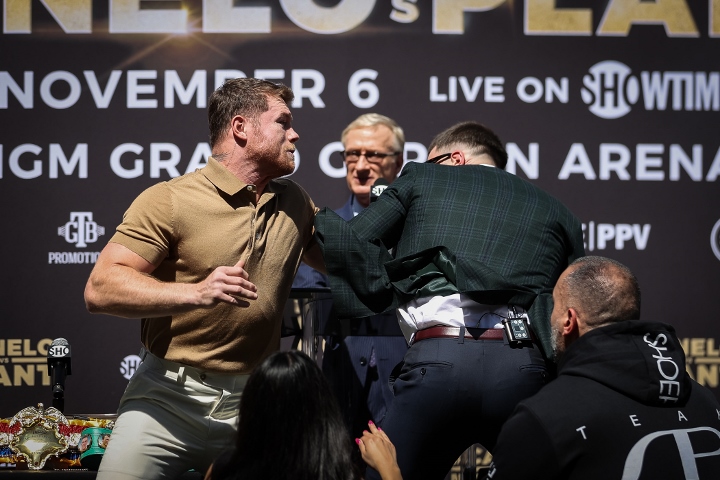 Canelo Alvarez was perturbed with Caleb Plant after his counterpart cursed at him during a  September introductory press conference in Los Angeles while promoting their Nov. 6 Showtime PPV fight at the MGM Grand in Las Vegas.

The two fighters immediately came to blows and swung at each other after Alvarez shoved Plant and drew first blood with a glancing shot underneath the Tennesseean’s right eye.

“I respect his skills. He has a lot of boxing skills, but the way he says bad things, that’s not my way of promoting fights. But he came with that. OK. You got what you want,” Alvarez said on the first episode of Showtime’s “All Access.”

“When I take something personally, for me it’s even better because my mind is strong. I train harder than usual. I am going to be in the ring that night thinking about what happened [at the press conference].”

Alvarez (56-1-2, 38 KOs) is looking to make history in his super middleweight matchup. The Mexican star is already the WBC, WBO, WBA and Ring Magazine champion, and the only title missing from his collection to make him undisputed super middleweight champion is Plant’s IBF belt.

Alvarez will be fighting for the fourth time in 11 months as a 168-pounder.

“I don’t think unifying a division has ever happened this quickly, in less than a year. That’s making history and that’s what I want for my career,” said Alvarez. “That’s something very important. It’s historic for all my fans, for all of Mexico. We’re going to make history, God willing, together.”

Plant (21-0, 12 KOs) appears to potentially provide Alvarez the toughest test he’s faced at 168 pounds, at least on paper. Alvarez’s other wins in the division have come against the likes of Billy Joe Saunders, Avni Yildirim, Callum Smith and Rocky Fielding.

Plant added a new pre-fight layer of mind games. It’s somewhat bothered Alvarez from the beginning. Back and forth banter aside, Alvarez knows that he’ll have a game fighter in front of him looking to pull off the upset.

“He’s a good boxer. He boxes well, he’s got a good fast jab, good combinations,” Alvarez said of Plant. “He’s tall, and it’s going to be rough in the early rounds. It’s not an easy fight, but I have the skills and I have the experience of being with fighters of all kinds of styles in the ring. And I have that experience and now the skills to pull this off. I’m very confident that I can do it. Not confident in a bad way, just confident in what I know and what I can do.”