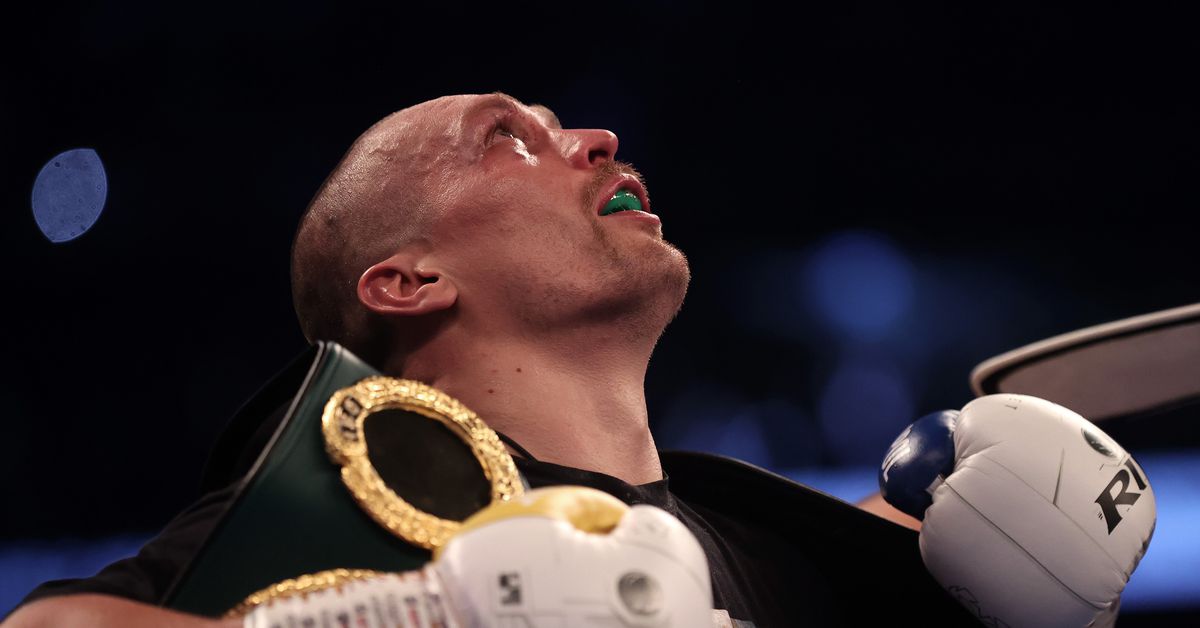 Rankings go up on Mondays. There will be no update on October 4.

Ranked fights the next two weeks:

Notes: It’s say to say that Oleksandr Usyk absolutely “belongs” at heavyweight, as he outboxed and outclassed Anthony Joshua on Saturday in London, winning a clear decision to claim the WBA, IBF, and WBO titles.

Usyk won’t be getting a crack at undisputed next unless Anthony Joshua passes on his rematch clause — which Joshua doesn’t seem to be entertaining — but he’s truly proven everything he can prove in boxing. Whether he were to fight Tyson Fury or Deontay Wilder or not, whether he beats them, Usyk’s legacy is now cemented. Olympic gold medalist. Undisputed cruiserweight champion. Heavyweight titleholder by beating a top star clean on the road. Anything Usyk does from here in his career is gravy, but I think he still will want to prove more. He is a genuine competitor, one of the great fighters of this era.

We’ll get into Usyk a bit more in the P4P list toward the bottom, so let’s also talk Anthony Joshua. I think we’ve learned a lot about Joshua in his career, which has also been a great one all in all, but it’s clear that Joshua is a very good fighter with real flaws, a guy who can be beaten. Against Andy Ruiz Jr the first time around, he got reckless and tagged, dropped, and stopped. He doesn’t get reckless anymore, but Usyk’s speed, southpaw stance, and superior boxing skills and IQ just gave him fits. He could not beat the man on the night.

I like AJ. He’s a genuine star, he’s a hard worker, and he’ll want to get back from this defeat just like he did with Ruiz, and him being beatable is not the worst thing in terms of making his fights more interesting. But he is definitely beatable, and from various angles. I think he’ll always beat a guy like Dillian Whyte. I think he beats a guy like Andy Ruiz nine times out of 10. But someone like Fury? I just don’t see how he beats Tyson. It’s hard to see a way other than raw power he beats Usyk in a rematch now that we’ve seen it play out once. And Wilder’s concussive power seems like a tough bet for AJ, too, because he doesn’t take the best shot in the world; I don’t think he’s chinny, but he’s not exactly iron jawed.

Still, he’s a top four, maybe top three heavyweight. Maybe to you that says more about the division than anything, but look at it how you will.

Notes: Lawrence Okolie didn’t show anything we didn’t expect or didn’t already know, but while the matchup was obviously absurd in the ring, Okolie didn’t make Dilan Prasovic his mandatory challenger, the WBO did, and Okolie did the job. We’ll see how Mairis Briedis looks in a couple weeks when he returns in a similarly lousy matchup, but that’s the fight to be made at cruiserweight. I wouldn’t argue with Okolie against anyone here, mind you, but Brieidis-Okolie is the fight and both of them know it.

Notes: I don’t think Callum Smith is about to be a mega destroyer at 175, but his frightening knockout of Lenin Castillo on Saturday was a highlight reel shot, especially considering we now know Castillo is doing OK.

Beating Lenin Castillo isn’t a “wow” win, really, but the way Smith did it was something that Dmitry Bivol and Marcus Browne didn’t do; Castillo went the distance with both, 12 and 10 rounds, respectively. The adjustment in rankings drops Eleider Alvarez, who hasn’t fought in 13 months, didn’t look good at all in his loss to Joe Smith Jr, and doesn’t seem that interested in fighting right now at all. I could have dropped Vlasov, but instead I’m bumping him up a couple spots for a strong showing against the aforementioned Smith in a controversial loss. I could have dropped Callum Johnson, but I think he’s a damn good fighter and would pick him to beat Alvarez if that got signed. So since it comes down to my opinion on little differences, Alvarez is the one gone.

Notes: It was time for some housecleaning at 168, really, and Callum Smith exiting the division gave me a good chance for that, so I took it.

This is a division in desperate need of new blood. Canelo is the clear top dog, Plant and Benavidez are at the 2-3 spots in whichever order, and then you have Saunders, who hasn’t officially retired but really might not fight again. From there, things get pretty spotty in terms of quality.

I’m going with a bump for Carlos Gongora all the way up to No. 5. John Ryder would be an easy call there because he really should have beaten Callum Smith in 2019, but he hasn’t really been impressive in two fights with club opponents since, and he might also be officially going up to 175 soon; he’s already dabbled, so if he signs a fight with Dmitry Bivol as has been floated, he’ll exit the rankings here immediately.

Daniel Jacobs sticks in his spot right behind Ryder, but Jacobs might also be moving up to 175, as he’s been discussed as a possible Joe Smith Jr opponent. And he didn’t look good last time we saw him, either. David Lemieux bumps up to No. 8 despite the fact that Lemieux hasn’t done much of real quality since moving up to 168 in 2019, and even his peak at 160 wasn’t that great; he’s a one-trick pony with a hell of a trick.

I’ve got Gabriel Rosado in at No. 9. He easily could have gotten the nod against Jacobs, and his upset of Bektemir Melikuziev in June was a good win. More than that, the options here are just really limited if you’re looking for someone who has a clearly better case. And Rosado might move back down to 160 to fight Jaime Munguia, too. No. 10 is Zach Parker, who has notable sanctioning body rankings and as good a case as Vladimir Shishkin, David Morrell Jr, Fedor Chudinov, Isaac Chilemba, Jesse Hart, Evgeny Shvedenko, Lerrone Richards, or anyone else you might consider. Edgar Berlanga is not as far from a legit top 10 argument as you might think.

The other fighter out is Anthony Dirrell. I like Anthony as a fighter, but he looks pretty cooked and doesn’t have a convincing win since beating Abie Han in 2018. Dirrell struggled with Avni Yildirim, lost clearly to David Benavidez, then went to a draw with Kyrone Davis, who followed that up by barely getting past club fighter Martez McGregor. With things changing up, I just didn’t see Dirrell deserving a spot right now.

Notes: You may have heard about a Tweet where Manny Pacquiao hinted that he’ll retire, and we know he’s going to run for President in the Philippines. It seems likely he has fought for the last time, but it’s boxing and you never know, first of all, and second of all, his management say he has not officially retired. So I’m leaving him here for now.

Notes: A big upset last week in Japan, with Masamichi Yabuki taking the WBC title from Kenshiro Teraji, who was previously ranked No. 1. I had Teraji a bit ahead of Hiroto Kyoguchi for a while, but now Kyoguchi takes that top spot. Yabuki comes in at No. 4, with Teraji dropping to No. 5. It’s been a tough run for Teraji in general for a bit now. Yabuki might actually retire; he’d intended to regardless of the outcome against Teraji, though he has reconsidered and might stick around, so we’ve got him ranked for sure.

Yabuki displayed a style that would make a great unification with either Kyoguchi or Felix Alvarado, so if he’s going to fight, here’s hoping he gets something big.

Notes: If you’re new, know this about me: I hate P4P lists and would rather not have them, but people asked and asked, and more than that, I wanted to do a women’s list so that they’d have some representation on our rankings pages, and doing that without providing the desired men’s list would have been dumb. But man, do I hate P4P lists and arguments.

That said…hey, we’ve got something worth discussing. To me, the P4P arguments suck mostly because so many people act like there are weak fighters in P4P contention. There aren’t. Everyone here is a great fighter. And with boxing being the way it is, and so few opportunities to see top P4P fighters in fights where they can really show something new or unique, the whole thing tends to be static and the arguments truly just opinion.

But all of that is sort of why a win like Usyk’s over Anthony Joshua can blast him way up the list even if you “only” had him around where I did previously. Usyk proved he is a true great of his era, a genuine elite fighter, period. And I think that win over AJ, with his cruiserweight resume behind it, gives Usyk at worst a clear top three spot, and even an argument for No. 1. I still think Canelo is the best fighter in the world P4P, but not by much ahead of Usyk and Inoue in particular, and maybe Terence Crawford, who I realize I have lower than almost everyone does. Crawford, too, will be getting a chance to truly prove he’s what he says he is and what most others believe him to be when he faces Shawn Porter in November. If he’s really impressive, Terence probably leaps back up into the top five.