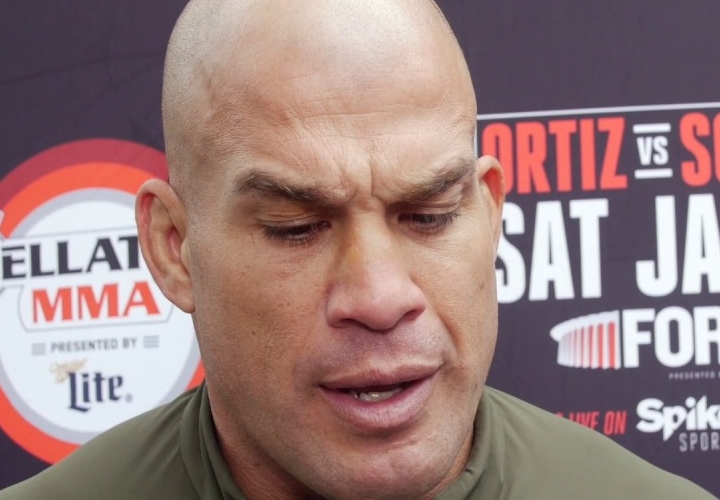 Tito Ortiz could not be more honored to soon share the ring with Anderson Silva.

The terms under which he had to accept the fight, however, has the UFC Hall of Famer and former light heavyweight champion with a different viewpoint of a fighter he has long admired. A catchweight of 195 pounds is in place for their upcoming clash on September 11, live on Triller Fight Club Pay-Per-View.

“I’ll cut my leg off if I have to in order to make weight. I’ll do it,” Ortiz quipped during a recent virtual press conference to discuss the upcoming boxing match between the pair of UFC all-time greats. “I’ve never missed weight in my whole career.

Ortiz spent most of his mixed martial arts (MMA) career fighting in the sport’s 205-pound light heavyweight division, where he won the UFC championship and successfully defended five times. The 46-year-old Huntington Beach, California native left the octagon in 2019, when he scored a first-round submission of Alberto El Patron in the main event of Combate Americas 51. Ortiz weighed 209 pounds, inside the 210-pound catchweight in place for the event.

More than one year prior, Ortiz (21-12-1, 15 knockouts/submissions in MMA) weighed 204.8 pounds for his third bout with fellow UFC Hall of Fame legend Chuck Liddell in which Ortiz—who suffered two previous losses in their series—won by first-round knockout.

The upcoming bout with Silva (34-11, 26 knockouts/submission in MMA; 2-1, 1KO as a boxer)—a 46-year Brazilian fight legend universally regarded as one of the best in UFC history—will mark the pro boxing debut for Ortiz, in addition to having to scale down to a weight he hasn’t seen since before embarking on his pro career inside the octagon. Silva has primarily fought in the 185-pound middleweight division, where he was champion for nearly seven years and owns the longest reign in UFC history at any weight.

In between Silva’s ten successful title defenses came three separate trips to light heavyweight, including his weighing a career-heaviest 206 pounds in a July 2008 win over James Irvin, whom he knocked out in just 61 seconds.

“I thought he would be a gentleman and make [a 200-pound catchweight],” Ortiz commented—repeatedly—about his hoped-for catchweight before he begrudgingly accepted a 195-pound limit. “I respect the man as a fighter but I lost respect for not fighting me at 200 pounds. I’ve never made 195 in my whole career of 24 years.”

Silva last fought outside of the 185-pound division in 2016, weighing 198.5 pounds in a non-title fight loss to then-light heavyweight champion Daniel Cormier. Silva took the fight on two days’ notice, replacing Jon Jones who was pulled due to a past positive drug test only discovered during fight week.

The last fight in the cage for Silva took place at middleweight last October, suffering a fourth-round technical knockout loss to Uriah Hall. He has since turned to the ring, where he earned a ten-round, split-decision win over badly faded Julio Cesar Chavez Jr. this past June in Guadalajara, Mexico. Silva weighed just 174½ pounds, well under the intended 182-pound catchweight—which Chavez Jr. missed, to the surprise of no one.

Silva decided to stick with boxing, welcoming Ortiz into this world though on his weight terms. Given the magnitude of the fight, it was ultimately an offer that Ortiz couldn’t refuse.

“I’ve always wanted to fight Anderson Silva,” admits Ortiz. “I thought we could do a catchweight at 200. It came to a situation… I got called for the fight on July 19. Then the first week of August, I was told either to take it or I’m not getting the fight. I wasn’t letting it get away.